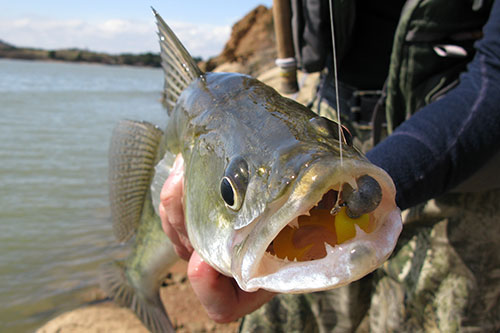 Biologists are using an innovative tool in the effort to prevent illegal fish introductions by identifying the source of the species and gaining new information that could catch the individual or individuals responsible.

The Montana Department of Fish, Wildlife and Parks was able to identify the original location of two walleye that were discovered in Swan Lake in October 2015. The research traced where the two fish were born and confirmed that they were not originally from Swan Lake. Microchemistry analysis of the calcium carbonate structure in the inner ear bones of the fish, known as otoliths, indicates they were introduced to the lake sometime in the spring of 2015.

Otoliths contain unique geochemical tracers from the water chemistry where the fish swims on a given day and these factors can be used to map the entire life history of a fish within a lake or river network.

FWP Fisheries Biologist Sam Bourret studied the intricacies of the walleyes’ otoliths and compared them to others from 14 popular fisheries across the state. The research found a match: Lake Helena about 10 miles from Helena.

The information provides an important clue into the ongoing investigation of who illegally introduced the walleye.

“Illegal fish introductions are a huge problem both ecologically and socially, and fish managers have few tools to combat the pervasive issue. This research gives managers a tool in their arsenal to help convict perpetrators,” Bourret said.

FWP biologists caught the walleye in Swan Lake during a gill-net operation. It marked the first time the species was discovered in the lake and raised concerns about the illegal introduction of yet another non-native fish in Montana’s waters.

Approximately 600 confirmed illegal introductions have occurred in more than 250 water bodies across Montana, and half of these have occurred in Montana’s portion of the Columbia River Basin.

“Our investigation continues and this technique provides important information that may result in catching those involved in the illegal introduction,” FWP Region One Fisheries Manager Mark Deleray said. “We will be using this technique on other cases.”

Illegal introductions can often lead to lost recreational fishing opportunities, as well as collapsing ecosystems and altered food webs. Walleye are highly predacious and could impact the native bull trout population, as well as the kokanee salmon fishery in Swan Lake.

A reward up to $35,250 is available for information leading to the conviction of whomever is responsible for the illegal introduction. The state of Montana offers rewards up to $15,250 for information about illegal fish introductions. Montana Trout Unlimited has pledged a reward of $20,000 for a tip that results in the conviction of the individual or individuals responsible for illegally introducing the walleye into Swan Lake.

Anyone with possible information on who introduced walleye into Swan Lake is encouraged to call 1-800-TIP MONT. Callers do not need to identify themselves and may be eligible for the cash reward.

“We need help from local citizens to catch those responsible for the illegal introduction,” Deleray said. “We expect the large reward will result in information.”

The Fish and Wildlife Commission approved a mandatory kill regulation for walleye in Swan Lake, Swan River, and their tributaries. All walleye caught by anglers must be kept and immediately killed. Walleye must be reported to FWP within 24 hours, and arrangements made for the entire fish to be turned into FWP within 10 days.