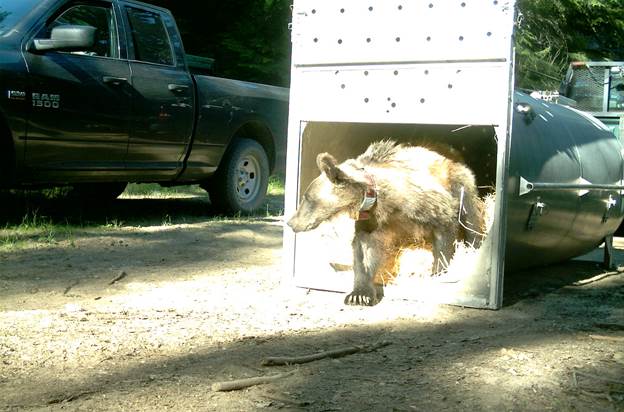 An adult female grizzly bear was found dead in the Spotted Bear area south of Hungry Horse Reservoir and the cause of death is unknown.

Montana Fish, Wildlife & Parks staff originally captured the 16-year-old grizzly bear in 2016 as part of a population trend monitoring program. FWP fitted the bear with a GPS radio collar, and the collar alerted agency personnel of the possible mortality.

FWP staff discovered the dead bear and retrieved the collar on July 24. Due to decomposition of the carcass, FWP was unable to determine a cause of death.

So far this year, 27 grizzly bears have been removed from the Northern Continental Divide Ecosystem (NCDE) due to a variety of circumstances, including management action, vehicle collisions, and augmentation. Bears are classified as being removed from the population if they die, are taken to an accredited zoo or facility if possible, or euthanized. One-to-two bears are annually targeted for relocation to the Cabinet-Yaak Ecosystem as part of an augmentation program.

On average, there are 25 annual removals in the NCDE, a designated grizzly bear recovery zone that spans Glacier National Park, parts of the Flathead and Blackfeet Indian Reservations, parts of five national forests and a significant amount of state and private lands.

Removals can result from a variety of circumstances and factors. For example, heavy snowpack can push bears into the valley floors in springtime where they may come in conflict with people and need to be either relocated or euthanized. Or if there is a poor berry crop in late summer and early fall before denning season, bears can seek out other food sources that are readily available, such as human-related food attractants, including garbage, livestock and bird feeders.

So far this year, there have been 13 grizzly bears removed from the population that were classified as “vehicle collisions.” Of those, nine bears were killed by vehicles and four were cubs orphaned due to a collision. FWP seeks to find placement of orphaned bears at accredited zoos or research facilities when possible.

The annual average for vehicle collision removals is three between 2000-2018.

FWP maintains a population monitoring program and follows protocols and management objectives that are designed to maintain a healthy grizzly bear population in the NCDE.

“We have seen an increase in human-related grizzly bear removals in the NCDE this year, which is concerning. Occasionally we do have years when we see a spike in removals. However, the population remains robust. We will continue to closely monitor mortalities and continue bear-human conflict prevention efforts,” said Neil Anderson, FWP Region 1 wildlife manager.

The NCDE is currently home to more than 1,000 grizzly bears. Northwest Montana is bear country with abundant populations of grizzly bears and black bears. Bears are particularly active in springtime and fall. Residents are asked to please secure food attractants around their properties to avoid conflicts. Recreationists are urged to “Be Bear Aware” and follow precautionary steps and tips to prevent conflicts.