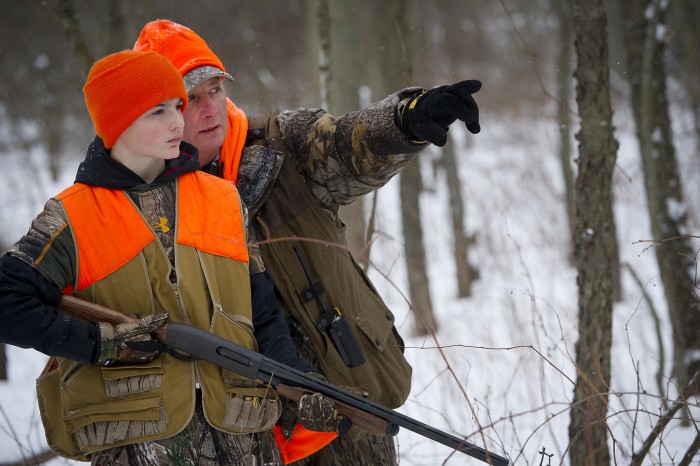 What Makes a Child Ready to Apprentice? (by FWP)
By angelamontana

Since 2015, Montana Fish, Wildlife & Parks has allowed children as young as 10 to hunt with a mentor for two seasons without completing Hunter Education. The decision of whether the child is ready to be an Apprentice Hunter is left up to the parents or guardians, but FWP offers some tips that may help them to make that decision, and to make the experience safe and positive.

Physical and emotional maturity: Is your child ready?

“What I mean by that is, is that youngster emotionally ready for the experience of taking an animal’s life, and dealing with that whole experience – the blood, the field dressing, and that process – and how are they going to take that in?” Cooperider asked. “And I think a big factor in how that plays out is how the parents handle it before, during and after.”

Children take a lot of cues from their parents’ behavior, he noted.

“There’s a compassion component that I think the parents need to exhibit with their kids, and patience,” Cooperider said. “Let kids know that it’s okay to not squeeze that trigger if they’re not ready. Because you don’t want to ruin them the first time out.”

If they do pull the trigger and down an animal, he advises paying close attention to the reaction.

“Be real conscious of how that youngster is dealing with the aftermath, and don’t force them into doing something they’re not comfortable with,” he said.

Field dressing an animal and eating a chunk of raw liver may be a cool tradition for some adults, but it could turn a child off to hunting in a hurry.

“There’s another component, too, and that’s being physically able to handle the firearm,” Cooperider said. “And it being sized for the kid, and having practiced with it and knowing how it functions.”

“And if they don’t practice with it, they’re not comfortable and confident in what they’re doing, and that’s a huge thing right there – that self-confidence, knowing the gun and knowing they can hit their target,” he added.

Give the child plenty of time to practice at the range or where you plan to hunt to instill that confidence.

“Try some shooting positions that they would actually use out in the field, and shoot at their target,” Cooperider advised. “That way, they’re going to know what their personal effective range is.”

Also consider that a child’s stamina is not equal to an adult’s, and plan the walking distance and activity according to his or her abilities.

Apprenticeship doesn’t require hunter education, but Cooperider will always be a proponent of kids taking the course first. They can also enroll in a course at age 10 and apprentice in the same season.

“I encourage parents, at any age, before they take their kid out hunting or the child buys his or her first hunting license, that they do everything they can to get that child into a hunter education class first. It just gives them a good basis to start with,” he said.