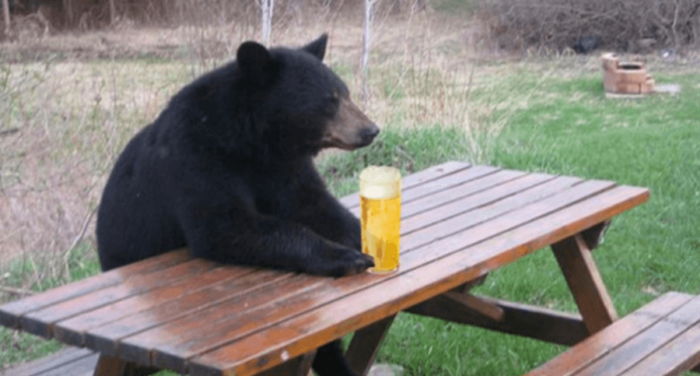 An article on countryrebel.com proved that humans aren’t the only ones who like a buzz every now and then.  The incident happened a few years ago, but it’s still a reminder to keep your camping areas and your homes bear-proof when you live in bear country.

Here’s part of the article:

Apparently, some campers were away from their tents, maybe going on a hike or swim and while they were gone, this backwoods bandit bear snuck into their campsite and opened up their cooler full of cold brews.

The evidence was discovered after they found the bear passed out with a trail of empty beer cans leading back to the campsite. A total of 36 cans were found with bite marks and bear claw punctures in them.

What’s even funnier about the situation is the bear was only interested in a specific type of beer called Rainier Beer. When investigating the scene it was found the bear opened one Busch Beer and apparently didn’t like it because he left the rest of them untouched. However, he drank all of the Rainier Beer.

“He drank the Rainier and wouldn’t drink the Busch beer,” said Lisa Broxson, bookkeeper at the campground.

When the park officials tried to chase it away from the campground the bear was stumbling so bad it couldn’t walk straight and climbed a tree to take a nap. Several hours later it woke up and park rangers were able to safely remove the bear.

Oh, but it gets better–the bear came back!