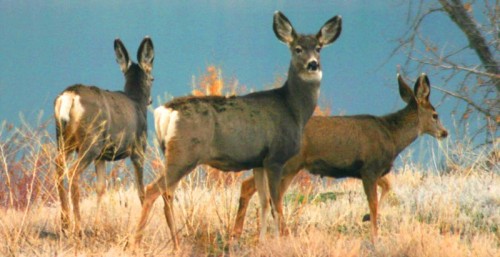 CWD management will bring changes with start of season
By angelamontana

Those changes will include hunters who visit CWD check stations being asked to allow Montana Fish, Wildlife & Parks to sample animals harvested in Priority Sampling Areas (see map for details). Also, CWD Management Zones will restrict the transport of whole carcasses or heads.

This year, FWP is paying for the testing of samples from hunter-harvested deer, elk and moose anywhere in the state regardless of whether they were taken in a management zone or sampling area. If these animals come from outside of sampling areas, hunters can either take the sample themselves (instructions at fwp.mt.gov/cwd) and mail it to the FWP lab in Bozeman, or bring the head to an FWP office for sampling.

What is Chronic Wasting Disease?

CWD is a contagious neurological disease that infects deer, elk and moose. It is slow moving, always fatal and there is no known cure. CWD is caused by infectious, misfolded prion proteins that cause normal proteins to misfold, leading to organ damage and eventual death. It is not a virus, bacteria or fungus. These prions are found throughout bodily tissues and secretions and are shed into the environment before and after death. When other animals come in contact with the prions, either from infected animals or from contaminated environments, they can be infected. The term “chronic wasting” comes from the appearance of symptomatic animals, which get very skinny and sick looking before they die.

CWD has been found in 26 states, three Canadian provinces, Norway, Finland and South Korea. It was found among wild deer in Montana in 2017.

CWD has not yet been detected in FWP Region 7, but FWP anticipates finding it due to proximity to known cases just over the border in Wyoming. For that reason, portions of Region 7 are Priority Sampling Areas this fall, and a Southern Montana CWD Management Zone will restrict movement of whole carcasses or heads beyond its borders. All of the Region 7 CWD check stations will be located within or near the Priority Sampling Area. FWP is referring hunters to a map showing sampling areas and transport restrictions across the state. The map will be updated as new cases of CWD are found. This map and extensive information about CWD and management efforts can be found online at fwp.mt.gov/cwd. Information is also available at any FWP office.

In Region 7, the Priority Sampling Area covers the southern portion of Hunting Districts 702, 704 and 705 (basically south of Highway 212). Animals harvested from these areas may be brought to area check stations or to the Miles City FWP office. Whole carcasses cannot be taken outside of the Southern CWD Management Zone, which includes HD 704 south of Hwy 212, HDs 502 and 510, that portion of HD 520 east of Hwy 212, that portion of HD 575 north and east of Hwy 78, that portion of HD 590 south of Interstate 90, plus the communities of Billings, Broadus, and others on the defined boundaries. CWD has been detected in Region 5, which is why it is part of the management zone. The Northern Cheyenne and Crow reservations are not part of FWP’s sampling and management zones, but hunters in these areas can still have their animal sampled.

What if CWD is found in Region 7?

If CWD is detected in Region 7, the next step will be to determine the prevalence or extent of the disease in the area where it was found, and how best to manage it. In other areas of Montana where CWD has been found, expanded sampling and special CWD hunts are used to determine prevalence. The goal is to keep the prevalence at or below 5 percent in any herd. Management is key because CWD will spread and could cause significant declines in deer and elk populations over time, as it has in other states. In Wyoming, heavily infected herds of mule deer declined 21 percent per year, and Colorado saw a 45 percent decline in infected mule deer herds over 20 years.

How does FWP sample for CWD?

Currently, there are no non-invasive CWD tests for live animals. After death, FWP collects the animal’s retropharyngeal lymph nodes, which are extracted from behind the pharynx in the throat area. To access these nodes, complete heads are required for testing, with about four inches of neck tissue attached. Detailed harvest location information is needed in case of a positive result so FWP can trace it to a specific area. Each hunter is given a unique ID number so he or she can check for test results, which should be available online in about three weeks.

Can humans be infected by CWD?

There is no known transmission of CWD to humans; however, the Centers for Disease Control and Prevention recommends that hunters harvesting an animal in an area where CWD is known to be present have their animal tested. If the animal tests positive, CDC advises against eating the meat.

How will transport restrictions affect me?

What do I do with the carcass or head?

Hunters are strongly encouraged to dispose of hides, bones and trimmings at approved landfills in the area or to leave the spinal column at the kill site (with landowner permission if on private land.) If they bring the whole head to a check station or FWP office for sampling, FWP will dispose of the head. FWP strongly discourages dumping of carcasses or parts near roadways and other areas where hunters do not have permission. It is unsightly and illegal, and if the animal has CWD, the carcass can transmit the disease for at least two years.

What if I want to have my animal tested but I plan to have it mounted?

Hunters seeking taxidermy services have a couple of options:

CWD check stations will be the primary method for FWP to collect samples this fall. In Region 7, check stations will be located at Ekalaka, Hysham, Ashland and Broadus. The Ekalaka, Hysham and Ashland check stations will be staffed on Saturday and Sunday from 10 a.m. to sunset and on Monday from 8 a.m.-noon. The Broadus station will operate on Tuesdays from 10 a.m. to sunset. See the attached table for times and locations. Hunters also may bring heads to the Miles City FWP office, preferably on Mondays and Tuesdays, between 8 a.m. and 5 p.m. They should be prepared to experience wait times during busy hours or to provide information and leave the head.

Check stations will focus on sampling animals harvested in the Priority Sampling Area. Hunters stopping with game taken from outside that area may experience a delay in getting samples collected. They may opt to take the sample themselves and mail it to the FWP lab in Bozeman or bring the head to the Miles City FWP office for sampling.

For more information about CWD or management efforts, visit the FWP website at fwp.mt.gov/cwd.