R2: Deer and Elk Harvest Ahead of Last Season in West-Central Montana
By angelamontana

Deer and elk harvest numbers are up at the end of the first week of the 2019 big game general hunting season, compared with the same time period last year, according to data from Montana Fish, Wildlife & Parks (FWP) check stations in west-central Montana.

The Darby station shows the biggest bump in elk harvest, where FWP checked 106 elk in the first two weekends of the season, compared to 70 in 2018.  Elk harvest at the station is not only ahead of last year but the highest since 2013—the last year that Darby Check Station was operated daily instead of only on weekends—and the whitetail harvest so far is the highest in the past three years.  Hunter numbers through Darby are the highest since 2014.

At Bonner, FWP checked 1,848 hunters with 22 elk, 81 white-tailed deer, 8 mule deer and 2 black bears in the season’s first week.  The elk harvest reported at Bonner is down so far this year, but whitetail harvest is up slightly from this time last year.  Overall, the percentage of hunters with game through Bonner is down slightly this season. 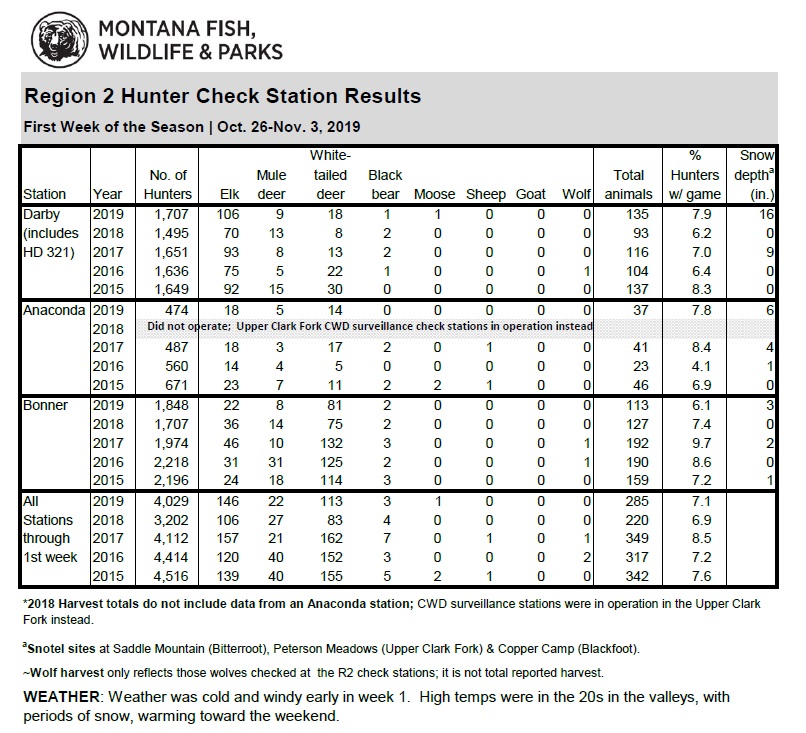