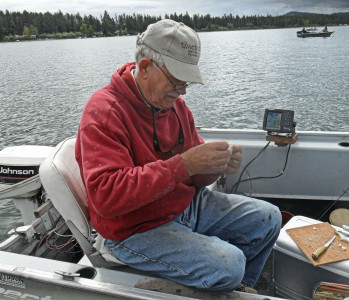 ​Ashley & Bitterroot Lake
Salmon bite has been hot, jigging Swedish Pimples with a glow hook tied a foot down. Throw maggots or white corn on the glow hook. Pick up some Kokanee trolling flies just in case the jigging is slowing down.

Flathead Lake
Lake Trout are biting cut plugs with maple sausage. Troll about 30-60ft deep. Whitefish are starting to bite in a few areas so be sure to have some whitefish jigs at the ready.

Lake Mary Ronan
Salmon and Perch bite is good. Leeches are working well for the Perch. Swedish Pimples with a glow hook tied on a foot down with maggot or white corn is the ticket for Salmon.

Thompson Chain
Head to Middle Thompson for some Perch, Pike and Salmon. Largemouth Bass bite is a little slow, so throw some chatter baits to get their attention.

Flathead River Sloughs
Sloughs are looking good so get out there if you want to catch some Pike or Panfish.