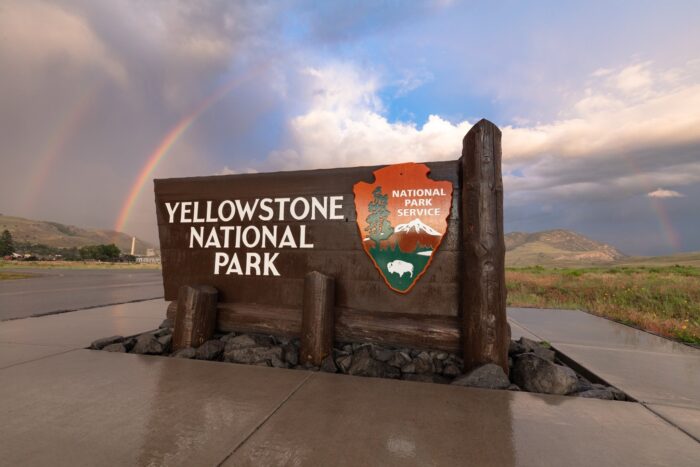 EA: Proposal to improve telecommunication services in developed areas of YNP
By angelamontana

The National Park Service (NPS) encourages public comment on an Environmental Assessment (EA) about a proposal to improve telecommunication services in developed areas of Yellowstone National Park. The proposal would also give the park the opportunity to remove obsolete telecommunication systems currently on mountaintops and from the backcountry as underground fiber within the road corridor becomes operational.
The park prepared the EA to evaluate potential impacts and determine if the park should authorize a right-of-way (ROW) permit. The EA examines two alternatives. In Alternative A (no action), the fiber optic network would not be installed. Alternative B (proposed action) would allow for the installation of fiber optic cable along existing park roads. If approved, the proposed action (an application for a right-of-way permit) from Diamond Communications, LLC. would allow for:
– Installation of fiber optic cable along 187 miles of park roads. See map: https://flic.kr/p/2kNhWVp.
– Appropriate equipment e.g., rubber-tracked vehicles, to install the conduit underground within the existing road corridor, immediately adjacent to and/or directly into the roadbed.
– Temporary and localized traffic delays up to 30 minutes and speed reductions in work areas from April until early November for three consecutive years.
– Removal of five microwave radio reflectors that were installed in the park’s backcountry around 1980. Removal could begin in the near future as fiber optic becomes operational.
– Broadband over fiber optic cable could replace the obsolete microwave system.
Additional proposal details include:
– It is estimated that 8% of the park is currently covered by cellular.
– The proposal would not expand authorized cellular phone coverage areas in the park but would substantially improve coverage quality in existing developed areas.
– This proposal is consistent with Yellowstone National Park’s Wireless Communications Services Plan.
– No new cellular towers would be installed under this proposal.
– Diamond Communications, LLC. would pay for all up-front construction costs.
– Once installed, the park could subscribe to the broadband services.
– Commercial telecommunication systems can be considered a utility and, like other utilities, are authorized on NPS lands using the right-of-way permit process.
The proposal addresses the following park issues:
– Bandwidth on the existing microwave radio system is inadequate and no longer meets the park’s needs for business operations, employee communications, and emergency communications and operations.
– Due to extremely remote duty stations, recruitment/retention for both the NPS and its business partners is severely affected by a lack of consistent and reliable connectivity.
If this proposal is approved, the benefits to NPS staff, partners and visitors would include:
– Improved telephone, cellular phone, park computer networks and broadband internet services that could meet critical park operations, safety and emergency services and visitor information needs and expectations in developed areas.
Comments must be received by April 21, 2021, and may be submitted online at: parkplanning.nps.gov/fiberEA or by mail. Following the comment period, the park will make a final decision about the proposal. A final decision is expected in summer 2021.
To learn more and read the full news release, visit: go.nps.gov/21006.