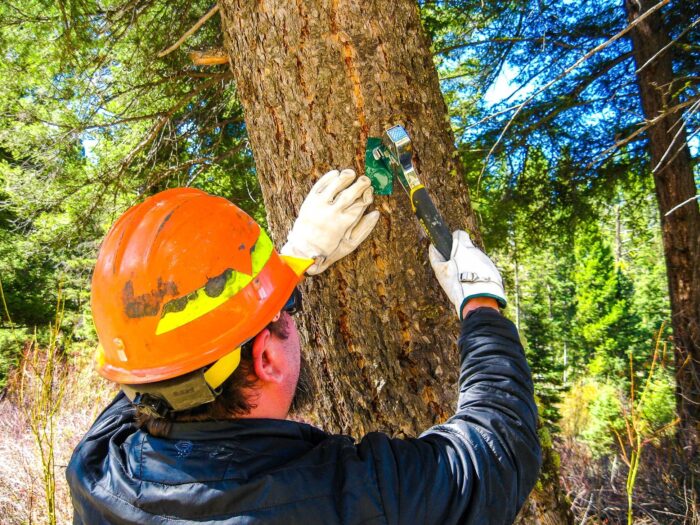 If you see a bag like this nailed to a tree, here’s what’s up
By Moosetrack Megan

Good afternoon. As we have talked about recently, our understanding of the world around us is constantly evolving. With this, our management practices change as well.
According to our Range and Invasive Species Program Manager, Jan Bowey, this year we are expecting a flush of Douglas-fir bark beetles. The Douglas-fir is one of the best timber trees in North America and is also one of the most desirable choices for a Christmas Tree (Britannica).
Concerning the impact of pine beetles, Bowey explained, “A lot of the dead trees that people see on the Forest are the result of a pine beetle attacking lodgepole pin in previous years.”
In response to this, BDNF personnel under the direction of BDNF Forestry Tech Joan Williams, will be stapling plastic bubble caps of MCH (3-methlcyclohex-2-en1) to Douglas-fir trees. MCH is a pheromone given off by female Douglas-fir bark beetles after laying their eggs that affects the behavior of other beetles by communicating to them that eggs have already been laid on this tree and signals to the other beetles to leave that tree alone.
The bubble caps are seen in the pictures below. They have been stapled to trees about six feet off of the ground in order to prevent being disturbed by young children and pets. If you see something like the picture below stapled to a tree as you are out enjoying the Forest, please leave them alone in support of our efforts to combat bark beetles.