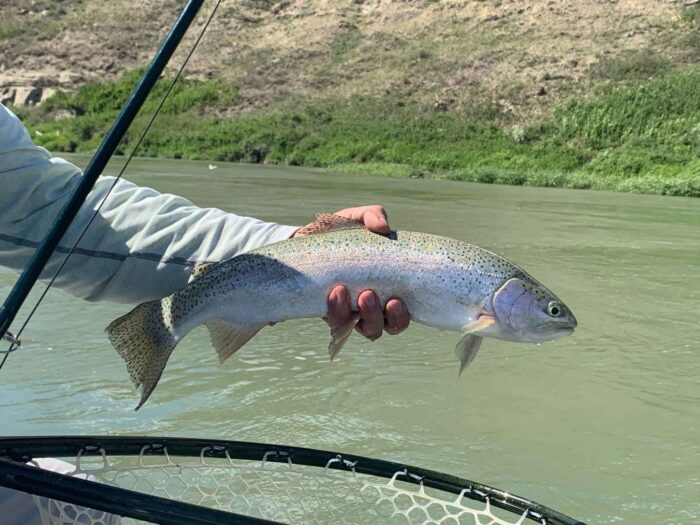 Fishing on the Bow has been decent despite the varying water conditions. Hot weather followed by rain has the river up slightly, but it is on the downturn and currently flowing around ~230 m3 /s. More hot weather is forecasted for the foreseeable future, which could lead to some evening caddis activity. Streamer fishing and nymphing during the day time has been the most productive, with some people finding dry fly opportunities later in the evening. Golden stoneflies have started to make an appearance and we will likely see an increase in stonefly activity here in the next little while. Green drakes will also be hatching when the conditions permit. We encourage you to get out on the river while you can and take advantage of the streamer fishing and dry fly action. Just remember to protect your eyes and skin when out in this early-summer heat; midday temperatures have been scorching! It is a great time to wet wade and cool off after a long day of work or a much-needed weekend.

The mountain rivers have been open for a little over a week now and are in great shape for the time of year. Fishing has been most consistent later in the day, as water temps are still cold and bug activity has been limited in the mornings. Fish have been eating drakes, BWO’s, gnats, droppers, as well as hoppers and stoneflies when temperatures heat up. Weekends have been busy with anglers and campers, a reminder that we need to pack out our trash and handle fish with care. Our mountain streams have not seen this amount of angling pressure before and it is our responsibility to ensure that they remain healthy, thriving ecosystems.