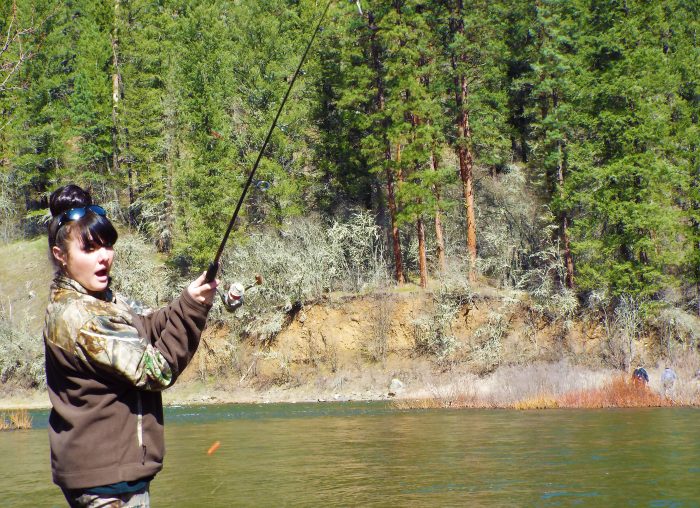 Debbie reports, “The fishing is iffy lately.  The big thing we are hearing is that they are catching pike and bass.  The walleye bite has not been so great.”

“Haven’t seen but one set of people going to the lake and coming back and no luck.  It has been a rather slow week at Deadmans.”

Judy reports, “Well, it’s the middle of hunting season, and the reservoirs are really low.  People have been cathing a few fish at Martinsdale and Bear, but that is all we have heard.”

Upper Madison: Nymph fishing continues to be the most consistent producer as of late. We have been tying on stonefly patterns followed by smaller (16-18) sized flies, or fishing two small nymphs. The hopper bite might be just about done, but a few fish have still been looking up for them on the warm/sunny afternoons, so don’t rule out a hopper-dropper rig quite yet. There’s been a few fish rising to baetis and small caddis as well, keep your eyes peeled out there. The streamer bite has been slow on the bright days we’ve been having, the early morning hours and then again late in the evening will be your best windows for opportunity.

Hebgen: Not much left for bug activity out there, so stripping leeches/buggers or fishing nymphs under an indicator will be the name of the game from now on. Switch up retrieval speeds until you figure out what they like that day. A sinking line will help you get down to where you need to be in some of the deeper trenches.

Gallatin: Not much has changed here in the last week. Take your time getting to the river as it’s running pretty cold. Nymphing will be your best bet, but swinging soft hackles in the riffles should find a few fish too. Watch out for fish rising to baetis, and you might bring a few fish to the surface with a small attractor dry fly once things warm up.

Madison/Firehole: Swinging soft hackles or nymphing has been most productive in the park stretch, with early mornings being the best for action. Streamer fishing has been tougher, but those willing to stick with it throughout the day have been rewarded, with the best times being early and then later in the evenings. The Firehole has been fishing well with soft hackles and small leeches. But still be on the lookout for some baetis hatching, especially on the cloudier days.

NE Corner: Similar to the Gallatin, these rivers are running pretty cold so take your time in getting over there. Watch for some Drake Mackerels and baetis to be hatching, and don’t put away your terrestrial patterns quite yet. Streamer fishing the NE Corner can be fun this time of year, so be sure to throw a few patterns in your box before you head out.

This week, Lake Elmo water level is down  about five or six feet on the way to fully dry this winter to eradicate invasive Asian clams. People still are catching lots of perch on bait. Some are targeting a few very large channel catfish and possibly a tiger musky that remain in the lake.