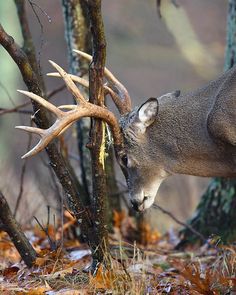 Hunting the Rut can be amazing. All deer species experience this annual mating frenzy. There are many things that affect the timing of the Rut.

Several years ago, I hit the elk Rut perfectly. For 4 days, the bulls were running. Bugling, chasing, mating, and looking for cows. The magical 4 days did not happen consecutively. They occurred over the course of a week. Bulls nearly ran me over while chasing cows.

When bucks and bulls go into Rut, they drop their guard and become more vulnerable. Mating is the only thing on their mind. This careless activity makes them a target for hunters and predators.

Photoperiod, or day length seems t be a key trigger for the Rut. Climate, weather, latitude, and other issues are all part of the Rut Switch. The prime buck or bull movement is just prior to and just after the Rut.

Not only does the Rut trigger bull and buck activity, but it also triggers the does and cows to go into estrus. The males target females in season. It is common for several males to mate with the same female. When the female is most in estrus, she becomes pregnant. Just because the biggest and strongest bulls and bucks fight over their breeding groups, lesser males always find a way. Mating is more random than previously thought.

Before the Rut begins and soon after, the male deer form bachelor groups and tend to be by themselves. Smaller males may stay with a female group until they are older.

For Montanans, the white-tailed deer will start rutting soon. There may be some differences in higher and lower altitudes or from forests to plains areas. Prime Time is normally from November 10-20th. The Rut may begin slowly, but in Montana it ends overnight.

Keeping annual records can be helpful but exact conditions change with the weather and other uncontrollable factors. Most hunters frequent the same areas and have a feel for when the Rut is most likely to be in play.

Pick a block of time that overlaps when you anticipate the Rut. Eventually, you can end up in the right place at the right time.