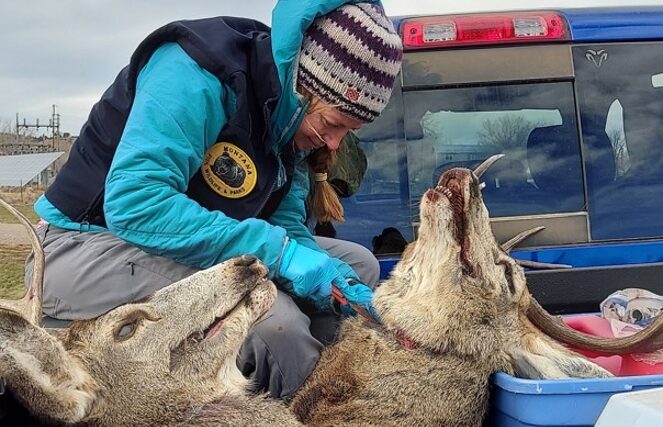 R7: HUNTER TRAFFIC SLOWS A BIT ON CLOSER IN SOUTHEAST MONTANA
By angelamontana

MILES CITY – The final weekend of the 2021 big game season was warm and windy, and check station traffic on Nov. 28 was a bit slower than is typical.

Hysham saw 116 hunters in 59 parties come through that Sunday. That’s just shy of the 10-year average of 134 hunters and 66 parties.

The 10-year average is an 84 percent success rate, but Atwood attributes some of that to a drop in bird hunters in the area.

No elk came through the station at the rest area along I-94.

Traffic at the Glendive check station was fairly slow, according to wildlife biologist Melissa Foster. She and biologist Emily Mitchell saw 35 hunters in 19 parties, with 16 successfully harvesting something.

Sharing some observations from the season, wildlife biologist Melissa Foster said, “In general, this season the warm weather made for tough hunting conditions. My area didn’t receive a single snow event during the deer and elk general season other than maybe a dusting. Deer were bedding down earlier and not as active in general this year compared to normal years.

“The severe drought this summer resulted in a lot of animals shifting their distribution; hunters reported not seeing deer in many of the usual spots,” she said.

Nutrition is a huge component of antler growth, and Foster heard from many hunters that bucks had smaller antlers this year.

“We finally received some moisture in October and a subsequent flush of green,” she said. “This much needed moisture and vegetation response served to distribute deer on the landscape, making them difficult to find and pattern.”

“Overall, it was a more challenging than normal season, but the mild weather also made for pleasant hunting conditions, and hunters generally reported enjoying their time afield this fall,” Foster concluded.

Ashland traffic was a bit less busy than typical for closing weekend, according to wildlife biologist Ryan DeVore.

A total of 59 parties, or 101 hunters, came through. Hunters had a slightly lower than normal success rate of 41 percent. Thirty-one mule deer (20 bucks, 11 does), 10 white-tailed deer (five bucks, five does), four cow elk and four turkeys were harvested.

“Overall, many folks were able to locate elk, white-tailed deer and turkeys this season,” DeVore said. “However, mule deer hunting was much tougher in the southern portion of Region 7 due to a sharp decline in numbers resulting primarily from the severe, extended drought since spring of 2020.”