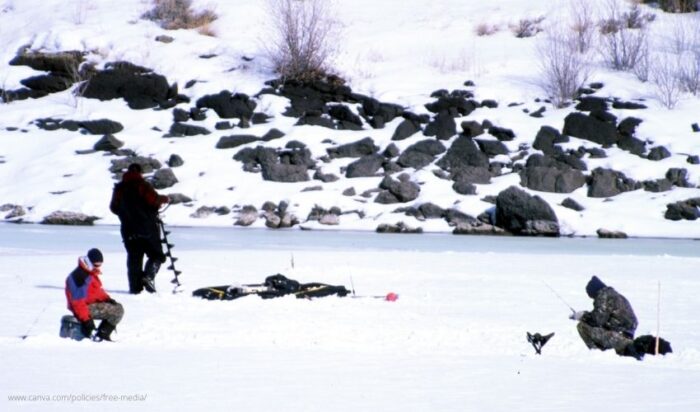 Anglers are reminded that ice conditions can be extremely variable.  Ice thickness can range from thick enough to support a vehicle to open water.  Extreme caution should be used when accessing the ice.

Canyon Ferry: Rainbows continue to be caught around the Silos in 10 to 15 feet of water while using white or orange jigs with mealworms, worms or maggots.  Perch and an occasional walleye are being caught out from the Silos near the old river channel in 15 to 20 feet of water and around Duck Creek in 50 feet of water on perch colored or black jigs tipped with various baits.  There is 16-20 inches of ice around Duck Creek and from Hole in the Wall down to the ponds.  The cold weather has hardened up the soft ice along the shoreline by Broadwater Bay. There is also fishable ice mid-reservoir and by the dam with anglers getting on the ice by Shannon, the Outhouse and Cave Bay. Troy Humphrey, FWP, Helena

Hauser: Rainbow fishing has been productive while using egg sacks or small jigs with maggots near the Causeway area and Black Sandy. Most trout anglers are fishing in 10 feet of water or less. Some burbot are being found out from the Black Sandy area while using cut bait during the late evening hours. An occasional perch or walleye is being found in the Causeway arm and in Lake Helena while jigging Pimples or Hali jigs with crawlers or maggots. Up to 10 inches of ice has been reported.  Chris Hurley, FWP, Helena

Holter: The Gates of the Mountains has been producing good numbers of rainbows however Sunday winds broke all the ice up. Rainbows are being caught on the lower end of the reservoir as well and anglers near Log gulch have been using egg sacks or small Pimples with maggots about 5 or 10 feet below the ice. Good numbers of small perch are being found out from Log Gulch and the clay banks across from Indian Trails. Jigging Swedish Pimples or Hali jigs tipped with maggots in 25 to 35 feet of water is working well. 10 to 12 inches of ice has been reported.   Chris Hurley, FWP, Helena

Helena Valley Regulating Reservoir: Kokanee action has been consistently good while fishing in 25 to 35 feet of water. Using various colored Hali or Swedish Pimple type ice jigs with maggots or corn is working well. An occasional perch is being picked up while using the same equipment near the bottom. 12 to 15 inches of ice has been reported.  Chris Hurley, FWP, Helena