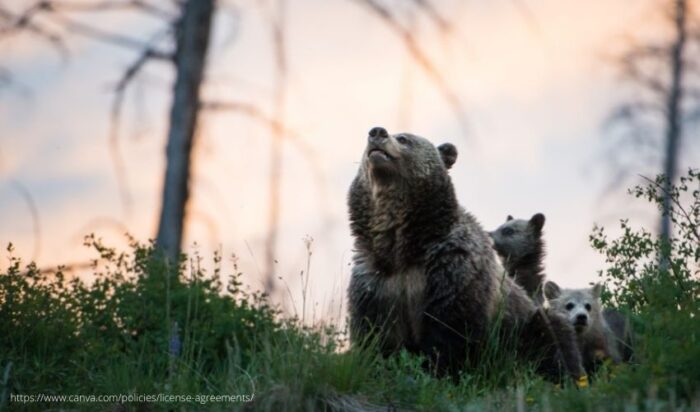 Farmers, ranchers, and property owners need to be bear aware
By angelamontana

HELENA – As grizzly bears emerge from their dens across the state the potential for conflicts with farmers, ranchers and other producers is increasing. In the past few years, bears have been spotted in areas where they haven’t been for more than a century, and the possibility of encountering a grizzly exists anywhere in the western part Montana. Black bears are also widely distributed across the state. Be bear aware.

Bears are always on the lookout for an easy food source, including unsecured garbage, spilled grain and livestock carcasses, all of which can bring them into proximity of homeowners and agricultural producers.

Grizzly bears are still a federally protected species. Landowners can haze grizzly bears off their property but must do so without harming the bear; this typically means using loud noises and hard-sided vehicles. U.S. Fish & Wildlife Service guidelines for hazing grizzly bears can be found here. Producers can reduce the risk of depredation by installing electric fencing around small calving pastures, pens and corrals. Be cautious around brushy cover including shelterbelts and creeks that bears may use as travel routes or resting areas. Additionally, putting salt, mineral and creep feeders out in the open, away from brush and water, can help deter bears.

Removing or putting electric fences around bone piles can prevent bears from receiving food rewards and being drawn in near homes and herds. In several areas around the state, local efforts have implemented the removal of livestock carcasses to avoid attracting bears near livestock operations. For more information about carcass collection efforts that might be in your area, please contact the nearest FWP specialist. You can find a list of specialists here.

In and around towns, attractants can include other things such as pet food, garbage, barbecue grills and bird feeders. Homeowners should secure these sorts of items to prevent attracting wandering bears.

Given grizzly bears are a federally protected species, conflict response is primarily conducted by FWP, tribal fish and wildlife agencies, and USDA Wildlife Services under the authority of the U.S. Fish & Wildlife Service. It is illegal to harm, harass or kill grizzly bears, except in cases of self-defense or the defense of others.

Landowners can take measures to prevent bears from being drawn near homes and livestock. Here are some general tips to help prevent bears causing problems in agricultural areas:

You can find more information on living and working in bear country, here.