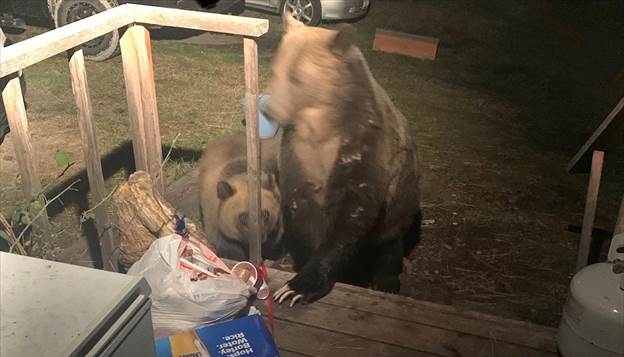 As a reminder, bears can still smell food in outdoor refrigerators and freezers and can often gain entry. FWP recommends freezers and refrigerators to be stored inside garages, sheds, or other secured buildings to avoid attracting a bear.

On June 23, FWP staff captured and euthanized a female grizzly bear south of Libby in the Silver Butte area. The bear, estimated to be 3.5 years old, was first captured in summer 2021 after killing unsecured chickens in Whitefish and relocated to the Puzzle Creek area near Marias Pass.

FWP received a report from a homeowner in the Silver Butte area that their chickens had been killed. FWP staff responded and captured the female grizzly bear at the property. U.S. Fish and Wildlife Service staff relocated the bear. Within two days, the bear traveled more than 10 miles to a residence near the original conflict site where it killed chickens, attempted to explore the home’s porch, and was sprayed with bear spray. The bear also returned to the original site, where it continued to show interest in the chicken coop, which was now secured.

The decision was made to euthanize the bear in consultation with the U.S. Fish and Wildlife Service and by Interagency Grizzly Bear Committee guidelines.

“This bear traveled from the Northern Continental Divide Ecosystem to the Cabinet-Yaak Ecosystem. We want bears to travel between both ecosystems because it’s good for recovery in the Cabinet-Yaak and good for the long-term health of both populations,” said Kim Annis, FWP bear management specialist. “But these bears won’t be successful if they get into conflict with unsecured food attractants, like small livestock.”

On June 22, FWP captured and euthanized a male black bear near Swan Lake. The bear, estimated to be two years old, was previously captured north of Columbia Falls after eating chickens on residential property. The bear was moved into a remote section of the forest but began approaching residences and breaking into unattended buildings, including a home. The bear was food conditioned and habituated to people.

On June 27, FWP captured and euthanized a male grizzly bear near Lake Blaine north of Creston. The bear was originally captured near Vaughn and moved to the Marias Pass area earlier this spring. The bear, a yearling, traveled across the Flathead Range, swam across Hungry Horse Reservoir and began frequenting residential properties along Lake Blaine, accessing garbage and chicken coops. Due to its food conditioning, FWP euthanized the bear in consultation with the U.S. Fish and Wildlife Service.

On June 29, FWP captured and euthanized a female black bear that was frequenting residential properties off Blanchard Lake near Whitefish. The bear, estimated to be six years old, appeared to have health issues related to tumors in its mouth and was getting into residential garbage cans.

If you see a bear near your residence or need to report a conflict, please call your local bear specialist: https://fwp.mt.gov/conservation/wildlife-management/bear/contact.