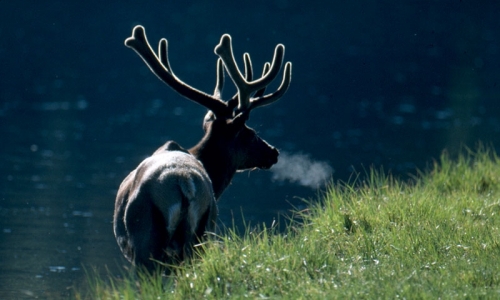 No elk for me on the opener
By Hookemharry

What a difference a year makes.

Last year I had bagged my elk during opening day of the Deer and Elk rifle season by 8 Sunday morning. This year my hunting partners and I hunted the same area as a year ago and spotted only one elk about a thousand yards away sitting on a mountainside, after two full days of hunting.

On top of that the elk was a spike bull, which is illegal to take in the hunting district we were hunting in.

The lack of elk on opening day was not that surprising since the area we hunt sees elk migrate in and out of it on a regular basis.

We have hunted in the past years for days without seeing elk and then just like magic we kick some out of the timber we are walking and if we are lucky we are able to get a good shot at one. We feel confident that if we are able to put our time in it will eventually pay off with elk in the freezer.

Yes the elk were nowhere to be found, but unlike the elk, the elk hunters were everywhere. There must have been a dozen vehicles perched up on the peaks in the area that we hunt on opening day trying to spot elk moving.

It also seemed as I walked the heavy timber that I saw plenty of hunters orange as hunters were walking the same treed mountainside.

The interest in hunting and elk hunting in particular is certainly high in Montana. However, what was interesting to me when I got back home Monday night was that wolves, not elk, seemed to capture the headlines in the Missoulian leading up to Sunday and then Monday and Tuesday after the season began.

There were some great stories told by hunters who harvested their first wolf. Wolf season also opened Sunday in many of the hunting districts in Montana and hunters were able to hunt wolves if they purchased a wolf tag.

Still the fact that wolves stole the headlines in the local news shouldn’t be much of a surprise considering this is the first wolf hunting season in Montana.

Wolves also entered in the conversations I had with fellow hunters that I had spoken with while hunting. The first question was: “Have you seen any elk?” followed by “Have you seen any wolves?” Some hunters had seen elk but every hunter answered no to the wolf question.

There was lack of snow where I hunted so it was impossible see any wolf tracks. The lack of snow also made it equally tough to track any elk that might have moved into the area.

The good news is because we live in Montana there is plenty of time for myself and other hunters who were unsuccessful to harvest an elk. The final hunting day for elk and deer this year is Sunday November 29.

The same can be said for harvesting my first wolf, unless of course the wolf harvest quotas in my hunting area are met before the end of the wolf hunting season.