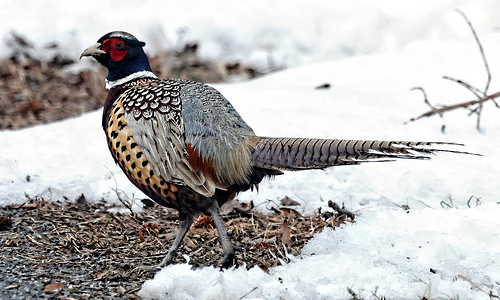 Pheasant hunting the Point
By Hookemharry

For the past few years I have headed east to enjoy pheasant hunting. For me, heading east is going 500 miles to Wolf Point. Now that might seem like a long way for some people but when you have good company the eight hour road trip goes by pretty fast. This year Jens Gran from Polson joined me, as he has for the last four years. Gran equipped with his hunting dogs and his unique Norwegian accent has become a favorite of the locals in Wolf Point, who we hunt with every year. And the locals have made the pheasant hunting trip more than just another hunting trip for Gran. “I really enjoy coming over here and spending time with the folks”, added Gran, “all of them are so genuine and they really want you to feel at home”. In the hunting world where “access” seems to be one of the main challenges that face hunters, the relationships that we have developed over the years have made access a non issue. Pheasant hunters know that to have a good pheasant hunt a number of things have to fall into place. The area that you hunt needs to have good habitat, the pheasants need to have a successful hatch in the spring, and it certainly helps if the land is not over hunted. The Fort Peck Indian Reservation is loaded with tribal and private land with excellent habitat. The Missouri River bottom with its miles and miles of trees, bushes and shrubs holds a lot of pheasants. This year the pheasant population is down from years past but it is still better than most places. Other areas around the state known for good pheasant hunting like Lewistown, Havre and Choteau have struggled with pheasants. The hunting pressure that Fort Peck Indian Reservation receives has increased substantially over the past few years. A few years back after I made my first pheasant hunting trip I made the comment that Wolf Point had not been discovered and was a hidden treasure for bird hunters. Today it is considered a destination point for pheasant hunters from not only Montana but the Dakotas and Wyoming. “The first two weeks of the pheasant season the hunting pressure is really strong,” said Bill Dasinger from Wolf Point. The best window to hunt pheasants is probably November and December, later in the year the better. There were ten hunters in our hunting party this year. On Friday we ended up with 15 birds and Saturday the number of birds we bagged was 10. Temperatures for both days were in the upper 60’s and no wind. Even though that is shirt sleeve weather and it makes it pleasant to spend time in the outdoors it might have been a little too nice for pheasant hunting. But there are advantages to hunting pheasants in nice weather. On Saturday for lunch one of the guys we were hunting with barbequed some hamburgers on a grill that he had in the back of his pickup. What a great way to spend a November weekend in Montana.