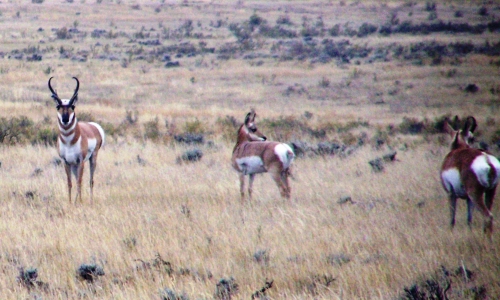 Antelope hunters are expected to have some good hunting opportunities in Montana’s western and central counties, but antelope numbers are substantially down to the east in FWP Region 6 near Glasgow and FWP Region 7 near Miles City.

“In the west, antelope hunting will be similar to what hunters experienced last year, but hunters in the east will see fewer antelope in the north central and eastern portions of the state,” said Quentin Kujala, FWP wildlife management section supervisor. “Antelope numbers in southwestern Montana are slightly down, but overall the trend there in the past five years has been upward.”

“We are seeing the cumulative effect of two long, difficult winters in eastern Montana on the winter survival and recruitment of antelope,” said Kujala.

Here are some details:

FWP biologists report that antelope numbers remain mostly good in FWP Region 2 in the Deer Lodge Valley and in FWP Region 3 in western Montana. In FWP Region 4 headquartered in Great Falls, antelope hunting is expected to be average at best.

“The number of either sex antelope licenses and doe/fawn licenses available in FWP Region 4 is down this year in anticipation of some low fawn production” Kujala said. “The adult population is holding it’s own but the number of fawns born this year is down.”

In FWP Region 5, antelope populations north and east of Billings continue to have low levels of recruitment. Since blue-tongue, a fatal virus spread by biting midges—moved through the area three years ago, summer census counts have shown 15-30 fawns per 100 adult antelope in the eastern half of FWP Region 5.

“Under normal conditions we would expect to see 60-80 fawns per 100 adult antelope,” Kujala said. The number of tags available to hunters has been reduced substantially in three hunting districts to reflect the sagging population.

The antelope population has also declined in the eastern portion of FWP Region 5 near Billings. Summer antelope counts show that recruitment—reproduction and survival of fawns for a least a year—is well below the historic average for the third year in a row in FWP Region 5.

“In addition to winter mortality in FWP Region 6, many antelope migrated south of Fort Peck Reservoir when it was frozen and were unable to return when the reservoir ice thawed,” Kujala said. “On top of that, antelope spring fawn production was way down too.”

In a few of the hardest hit hunting districts either-sex antelope licenses have been decreased by more than 90 percent. FWP anticipates issuing low numbers of licenses for the next few years to allow antelope populations to rebuild.

“Very few individuals from the 2010 and 2011 fawn crops in Region 6 remain in these herds, according to our surveys,” Kujala said. “As a result, these two age classes will be making little or no contribution to the overall population for the duration of what might have been an eight to 10 year life expectancy.”

Kujala said an antelope population impacted to this degree will have to rebuild over the long term, and that means fewer licenses in coming years.