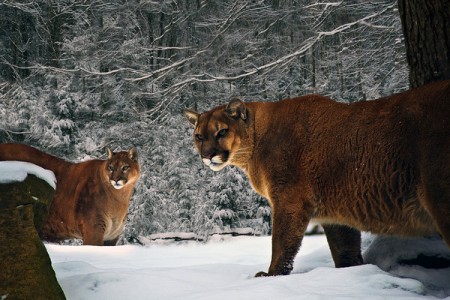 Montana Fish, Wildlife & Parks will host a public meeting in Missoula on Tuesday, May 22 to share information and answer questions on the proposed 2012-13 wolf hunting and trapping season and the proposed changes to the mountain lion quota levels for west-central Montana.  The meeting will begin at 7p.m. at the Holiday Inn, Downtown at the Park (200 S. Pattee).

Under the wolf season proposals for 2012-13, the general season would run from Sept. 1 to Feb. 28, 2013, with trapping allowed from Dec. 15 to the end of the general wolf season. There would be no statewide quota, but quotas would be established in two areas near Glacier and Yellowstone National Parks.

Features of last year’s hunt that would remain in place include mandatory harvest reporting within 24 hours, and the FWP Commission would have the authority to close the season in any wolf hunting unit hunting unit or portion of a wolf hunting unit if necessary to prevent overharvest.

To view the wolf proposal information meeting schedule for all Montana communities, and to find more details on the season proposals and to submit comments online, visit FWP’s website at fwp.mt.gov. Click “Hunting.” The comment deadline for the wolf proposals is June 25 at 5p.m., and the Commission will make a final decision in July.

The May 22 meeting in Missoula will also address proposed changes to west-central Montana mountain lion quotas and subquotas and an adjustment to the allocation of special mountain lion licenses. Under the proposal, an unsuccessful special lion license applicant could purchase a general lion license valid for any open district statewide during the fall season and for any open quota areas in FWP Region 2 during the winter season.

Find out more about the lion proposals online at fwp.mt.gov. Click “Hunting.” The lion comment deadline is Friday, May 25 at 5p.m., and the FWP Commission will make a final decision on the proposals at its June 14 meeting in Helena.