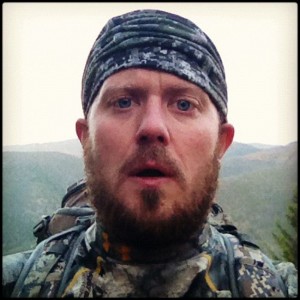 As I lifted my pack from the ground to my shoulders, I was instantly brought back to the strenuous, yet breathtaking journey ahead of us. I glanced over at dad and gave a smirky smile in excitement and a little in dismay. The trail (if you can call it that) ahead is some of the most inaccessible country I have ever left tracks upon. There is something so wild and remote about places where few men have ever traveled that greatly intrigues me. In fact, this is the same place where I broke my leg on that haunted mountainside that late September afternoon. Yup…you guessed it, this past weekend dad and I packed into the Scapegoat Wilderness that has been closed since late July due to fire.

With elk on our mind, this voyage has so much to offer visually that you can become easily distracted. As we finally approached the wilderness boundary with little to no sign of elk, it was only moments later we found out why. With hundreds of acres being closed to all access for months, we figured it was going to be a wapiti paradise with elk running everywhere. Apparently we weren’t the only hunters that had that hunch. Made just moments earlier, the most proficient hunters on land left their tacks in the trail. We had missed a pack of wolves by seconds and my wolf tag was burning a hole in my wallet.

As we looked up the drainage we knew we only had a few minutes to make our move before they would disappear over the ridge. Dropping our packs we started covering ground the fastest we could, scanning the terrain for the great white of the woods. Stopping to catch our breath, we heard commotion to our left and the pack was busting through a small patch of timber to the ridge for safety. The trees were so tall that all we could see was the rocks. The wolves were rolling, as they scuttled up the slide to make their getaway. I sprinted as fast as I could back to the right in hopes of getting a glimpse of these predators, but I was too late. I don’t smoke cigarettes, but I would have loved to light up a wolf. Hell, I might have smoked the whole pack (sorry for the play on words.)

To quote Tom Petty, our Scapegoat hunt was summed up by his lyrics quite nicely. “It was something you could dream of, but never could quite touch.” We came damn close to harvesting a magnificent creature, but still shared a super wild experience. We were within 100 yards of a pack of timber wolves…for the love of wild places.