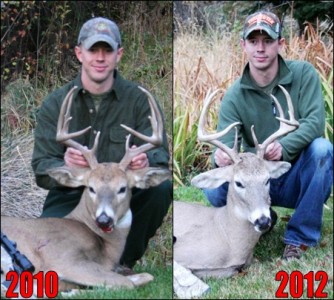 “The Buck Stops Here”…Across from the Gravel Pit
By angelamontana

The gravel pit across the field where Jason Maxwell, a native Montana hunter, shot his 2012 buck, boasts some really nice whitetails.  Not only are some of these bucks big, but they all seem to be related somehow.

For example, if you look at the picture of Jason’s buck from 2010 and compare it to that of 2012, you will see that their antlers are quite similar.

This particular buck happened to be with two smaller bucks the morning of October 27th, and even though Jason was crouched way down in the tall grass, the smaller bucks noticed him.  To Jason’s advantage, the youngins were too focused on getting across the field back to the gravel pit to be cautious, so the small ones went first and the bigger one followed.  It took the big buck standing broadside to Jason for him to pull the trigger.  Much like former President Truman’s quote, “the buck stops here”, the buck really did stop here.  He got him at around 70 yards.

Even better, he has seen monster bucks across the street that, if they make it through rifle season this year, will be even more enormous next year.  There are also a couple of non-typical bucks wandering around the area. So, it will be interesting to compare his 2013 buck with these two. 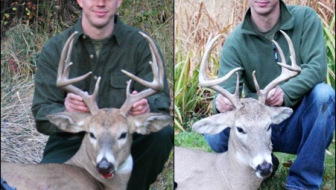