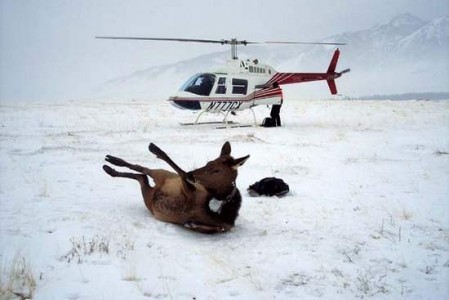 What will be covered?

Specifically, FWP wants to alert those in the Dillon, Sheridan, Ennis, and Twin Bridges about its intention to perform elk capture efforts in the southern Pioneers this winter, then the southern Tobacco Roots in the winter of 2013-2014.

The meeting will also serve to address questions and concerns about the project and include a discussion about the efforts and recommendations of the Elk Brucellosis Working Group. The Working Group – made up of 12 citizens representing diverse interests – worked collaboratively to devise several proposals meant to address brucellosis and elk management.

Montana Fish, Wildlife and Parks is in the midst of a multi-year study to evaluate the presence of brucellosis among elk in southwestern Montana and improve understanding of how elk herds interact. In January of this year, crews captured and tested 130 cow elk (30 were captured south of Bannack, 93 were captured southeast of Dillon, and 7 elk that were part of last year’s operation were recaptured near the Blacktail Wildlife Management Area).