This week, let’s study some shotgun types that have become somewhat rare in the modern shotgun world. Those types would be the bolt action and the lever action shotgun.

Bolt action shotguns were produced in the early 1900’s and were quite common. They were a very safe, reliable, and inexpensive repeater. Many of today’s manufacturers such as Marlin, Mossberg, and Savage made thousands of bolt shotguns a hundred years ago. In addition, marketing companies such as Sears, Montgomery Ward, and JC Higgins sold some of the same guns, but with lesser expensive stocks, and the barrels were stamped with each company’s name. Today, Browning offers its A-Bolt design in a shotgun that has a rifled barrel that provides excellent accuracy with slugs. This A-Bolt is not a bird hunting gun, but a great short range big game gun.

In the early days of inexpensive pumps and autoloaders, bolt shotguns provided a stronger alternative that was better able to handle the higher pressures of modern shot shells. Most bolt guns had a blind box magazine, although I have seen a few with tube magazines much like those found on rimfire rifles. Bolt shotguns work quite well in waterfowl blinds and the deer woods where fast follow-up shots are usually not necessary. Chasing speedy quail with a bolt shotgun is pretty much a single shot endeavor. If you ever get the opportunity to fire a Marlin “Goose Gun,” take it, it’s a lot of fun. 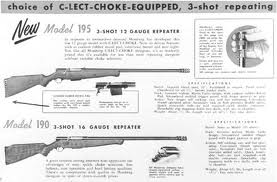 Lever action shotguns are even rarer than the bolt guns. The Model 1887 lever action shotgun was designed by the American genius, John Browning and marketed by The Winchester Repeating Arms Co. It was considered the first successful non- double barrel shotgun repeater. The gun was originally offered in 10 and 12 gauges and fired black powder shells only. With the advent of smokeless powder the gun was redesigned in 1901 and only offered in 10 gauge so as not to compete with the wildly successful Model 1897 pump shotgun.

The recent popularity of cowboy action shooting games has resulted in a renewed interest in Model 1887 lever action shotguns. Cimarron, Chiappa, Century Arms, and others have replica guns available. Cost and quality varies but reports are that these are solid performers. Rossi also makes a 410 lever action shotgun that strongly resembles the Marlin 366 centerfire rifle.

While original Model 1887 and 1901 lever guns have become quite expensive collector’s guns, there are many used bolt shotguns that can be had for around $ 100.00. Just make sure you have a qualified gunsmith examine them.