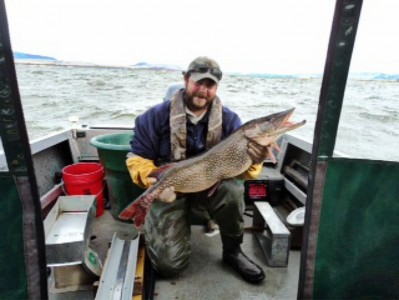 The annual spring spawning survey on Canyon Ferry Reservoir is underway and battling mother nature seems to be the only constant thus far. Three trap nets were launched, two on the east shore at standard locations and one on the west shore, during the week of April 3rd and traps have been monitored at least three days weekly over the past two weeks. Rainbow trout numbers in the traps have been at or above average, but cool water temperatures and wind have slowed the walleye spawn thus far. Just over 100 walleye have been captured as of April 15th and the majority of the catch have been ripe males. Only a few green females have been captured to date, but look for that to change with the forecast calling for warmer temperatures and a full moon on the horizon. The most interesting capture this spring has been the presence of 8 northern pike larger than 10-pounds.

If you have any questions or are interested in volunteering for a day during the field season, give me a call at 495-3263.