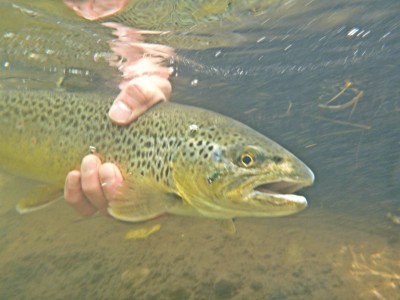 Butte/Bozeman Recreation Report by Bob Ward and Sons – 4.19.13
By angelamontana

Bozeman Fishing
With the unpredictable weather we are having be sure to bring a variety of flies. Nymphs, eggs, and worms are working better for cloudy days but if the sun pops out try BWOs and March Browns.

On the Upper Madison River eggs and worms are effective. Olive colored streamers have been working well on the cloudy afternoons. BWO’s and midges have been hatching and we’ve seen some dry fly fishing success on cloudy days, but nymphing has been the way to go most of the time.

The Lower Madison is seeing improved water clarity over last week but it still has some color to it. We recommend worms trailed by little Baetis nymphs as a good option.

Yellowstone River fishing has been sluggish and continues on that trend. There has been a little color coming through from time to time. The streamer bite has been decent if you’re willing to really work it and there has been nice fish caught that way. Nymphing has been slow at best.

Fortunes change when you hit the Gallatin. It has been the best choice close to town this week, especially with the Lower Madison on the dirty side. March Browns have been hatching up in the canyon with some pretty good dry fly action during the afternoon. Midges are still good along with a few baetis.

Butte Fishing
Higher Temperatures in SW Montana for the month of April have melted the ice at local lakes and reservoirs, except for holdouts Delmoe and Georgetown.

Clark Canyon reservoir is getting off to a good start for bank fishing as well as trolling. Bank fishermen are casting crawler harnesses or egg sacs. Crawlers suspended in 12” to 15” of water on the Red Rock end are bringing nice Rainbow trout into the boat. Size 7 to 11 jointed shads or deep diving rapalas are hooking fish from Red Rock and Lone Tree.

Blue Wing Olives and BWO Emergers are doing well on the Beaverhead on warm days specifically. Streamers and Buggers have shown promise on days with cooler temps. Bring a heavy leader as you will be casting in the wind.

The Big Hole River has been muddy with the recent storm systems. However, with clear water in Divide Canyon the Big Hole has been fishing good. The same can be said for the south end of Melrose near Salmonfly Bridge. Big Streamers, or Buggers and Bead Head flashbacks or San Juan worms have been good choices. UV Mepps, Panther Martins and Countdown Rapalas have been good for the spin fishermen.

Georgetown, still heavy with ice, has been exceptional fishing this season according to locals. All baits or powerbaits, corn, maggots and night crawlers have been good. Vertical jigs and glo hooks tipped with worms or maggots have been bringing home the Brown Trout.