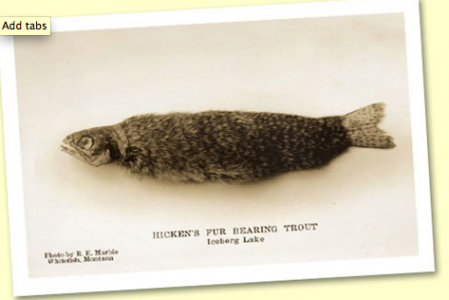 Have You Ever Caught Montana’s Rarest Fish?
By OutdoorAly

A rare, nearly extinct breed, the Hicken’s Furbearing Trout was reportedly caught in a Montana alpine lake earlier this week. The reports came as a shock to anglers around the state, as the last reported catch was published in May 1929 issue of Montana Wildlife, the Official Publication of the Montana State Fish and Game Department, which can be found HERE. 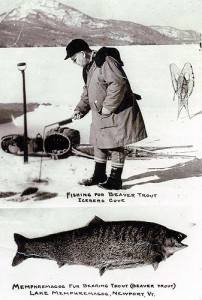 The Furbearing Trout is from the Artikdannder genus of fish and is found in arctic and mountain lakes north of the 72nd parallel. Its diet consists primarily of ice-worms and fod. It is thought to have developed a fur beaver-like pelt layer to survive the frozen waters of higher alpine lakes. Sometimes confused with the more common Alpino-Pelted Trout, the Artikdander genus of fish consists of three different species of fish. The most common being the Alpino-Pelted Trout. Lesser know are the Beaver Trout and the Hicken’s Furbearing Trout, first discovered by J.H. Hicken in 1929.

This phenomenal reported sighting in Montana was nearly trumped by another report of a similar species earlier in the 2013 ice-fishing season highlighted in a news clip on 9&10 news in Michigan (see video below). That report was later found to be a publicity hoax set up by local fisherman to draw tourists to the area. Coincidentally, similar reports and sightings of this rare fish surface on or around April 1st every year.