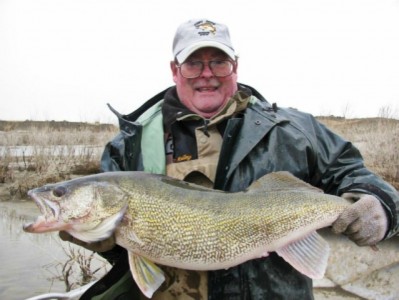 (photo of John Kelley with a green female walleye – courtesy of montanawalleyesunlimited.net)

On large bodies of water like Fort Peck Reservoir in northeastern Montana, fishing can sometimes be unpredictable. On a positive note, this spring the fishing has been very good compared to the last few springs. The weather has been milder, and the lake is now seeing the fruits of the ideal lake elevations that it experienced in the past few years. In fact, In-Fisherman, a national angling magazine ranked Fort Peck as the nation’s number one walleye water in its 2013 Walleye Guide.

Walleyes aren’t the only species that have done well because of better water levels. “Fisherman tell me that they can’t keep the northern off their hook if they are walleye fishing,” reported Bill from Rock Marina which is located on the Big Dry Arm of the lake. “They have resorted to putting steal leaders in front of their jig so the jig won’t get bit off”.

That was a couple of weeks ago, now the walleyes are biting just as aggressively and it is just in time for the Rock Creek walleye tournament that will be held this weekend. This is the one of many walleye fishing contests that take on Fort Peck every year and this tournament normally produces the heaviest weight among all the tournaments. “The big female walleyes that spawn in the Big Dry Arm hang around before heading to the main lake later in the summer.

Three years ago, the winning weight was over 85 pounds, that’s an eight and half pound average per fish. Walleye teams are allowed to weigh in their 10 largest fish in the two day tournament.

I will be at Rock Creek this week and you can hear firsthand how the fishing is by tuning to the Montana Outdoor Radio Show this Saturday morning from 6-8am on KGVO 1290am/101.5fm. I will be broadcasting live from the Rock Creek Marina. All, across Fort Peck, including the Hell Creek, located in the middle of the main lake, have been fishing well for walleyes.

If you have ever dreamed about fishing Fort Peck in the past, but never made it over. this should be the year you decide to go. “The state campground reserved sites have been booked for a long time for June and July”, said Craig Putchat the Montana Hell Creek State Park Manager. “The fishing is good plus the folks have figured out that they can reserve spots in advance and they have been taking advantage of the reservation system we have been offering the last couple of years ”.

Hell Creek State Park designates 25 percent of the 45 electrical sites as “Walk Up” sites and the 10 non electrical sites are also on a walk up basis at Hell Creek. In my opinion you won’t find a better body of water in Montana that offers better walleye, northern pike, and small mouth bass fishing this year no matter what part of the 134 mile reservoir you decide to fish.

In other waters, the water level has come up and is rising fast on Canyon Ferry Reservoir, and the walleye fishing will improve on the south end as the water warms up. There has also been good reports on some nice walleyes being caught coming out of Fresno Reservoir up by Havre in the northern part of the state.