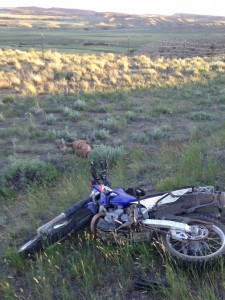 Motorcyclist Hospitalized After Collision With Deer
By OutdoorAly

Photo by Eddie Gregg/Billings Gazette
Neither the deer or the rider fared well after a Laurel man riding his dirt bike collided Friday on Molt Road. The 24-year-old Cole Knowles was riding his Suzuki dirt bike around 8:15 in the evening when a deer jumped out in front of him.
Knowles said he was able to jump from the bike before it hit the deer. He was taken to St. Vincent Healthcare and treated for an ankle injury and road rash.
The deer didn’t fare as well; it was badly mangled and likely died from impact. The deer’s body and the motorcycle were both lying in at the crash site one or two miles west of where Angus Avenue intersects with Molt Road.