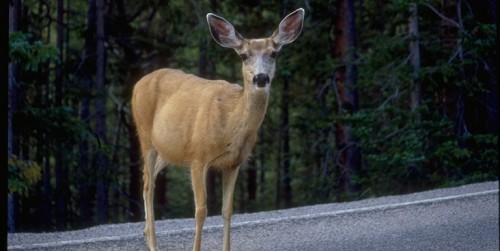 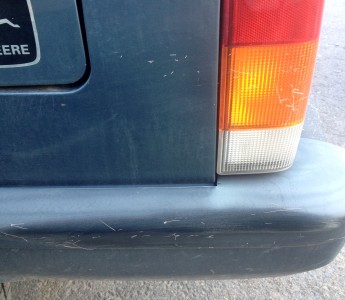 So, here I was last night, driving home through the cookie-cutter subdivision where I reside, just singing to the radio.  I saw a motorcycle in the opposite lane heading toward me just as I noticed a muley doe on the side of the road behind a house.  She seemed like she was contemplating her next move…I pictured her asking herself “Should I cross the road?  Should I wait for the vehicles to pass? How much of a hurry am I in?”…

Well, she stopped as the motorcycle passed her, and I had slowed down to approximately 5 mph in anticipation of the doe’s crossing–but, she waited right where she was.  So, as I continue, I hear a THUMP.

For some reason, the Einstein doe decided to wait for the motorcycle to pass–thank goodness, but she didn’t wait long enough for my vehicle to completely pass.  She ran right into the back of Jeep Cherokee head-first.  Yes, the back side of it…and remember, I was going approximately 5 mph.  I wasn’t even sure it really happened, but two people witnessed the collision, and there is a small dent in my Jeep (see picture), along with some deer hair.  The doe never skipped a beat and took off running across a field.  In the aftermath of the collision, I concluded that the doe thought the buck on the John Deere sticker I have on my gas cover was real.  That’s the only logical explanation I could come up with after going over the incident.

I’ve heard of people saying that deer hit them over them hitting deer, but I have never experienced its first-hand, so I am officially now part of this elite group of people that can relate to this type of oddball thing.  And, I know that muleys aren’t exactly the brightest of deer, but let me tell you, I am now pretty darn optimistic about deer hunting this year, as I drew a mule deer tag this year in the 250 district down the Bitterroot.   It shouldn’t be a problem getting a good one if they are all like this!

Out of the 34 years I have been alive, I have never hit a deer, and it’s funny that I can still say that.