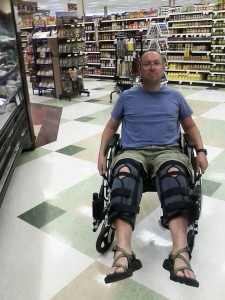 Andy Hill is the founder of the non-profit organization called Fishabilities (www.fishabilities.org), which he created to give individuals with physical disabilities the opportunity to go fishing.  Well, Andy went tubing for the first time in the 21 years since he first moved to Missoula, and, unfortunately, his trip was not memorable in a good way, and now he can relate to the individuals he was trying to help when he created the organization.

This past Sunday, a man was jumping off the Bandmann bridge in Bonner when Andy and his group were floating down the river and just happened to make it underneath the bridge.  Unfortunately, the jumper failed to see Andy below until it was too late.  He jumped right on top of him, crushing his legs.  The news reports haven’t exactly stated the severity of the injuries.

Andy is currently confined to a wheelchair for most likely the rest of the summer and still in a great deal of pain.  Not only were both ACLs torn and both fibulas also have chips in them, but his left femur is also cracked.  On top of that, he also ended up losing his iphone 5 in the bottom of the Clark Fork River during the commotion, and a $200 deductible was required to replace it. 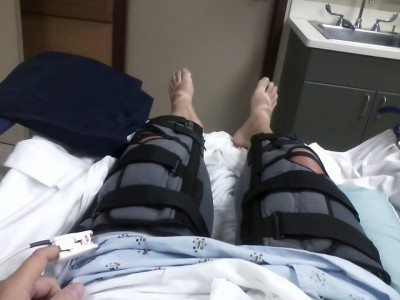 When I told Andy that it was a good thing he had a sense of humor throughout this ordeal, he responded with, “And you have to have a sense of humor about it. As frustrating, painful, infuriating, inconvenient, and uncomfortable as it is, it’s just such a ridiculous scenario that you can’t help but laugh.”

This all happened after Andy had lung surgery to correct a collapsed lung just last month, and he is still not fully recovered from that surgery.

Here is a description of the whole tubing incident in Andy’s words:

We were about 300 feet down the river when suddenly I went underwater and was in intense pain. When I popped back up to the surface (still on my tube) there was a guy across my lap. He’d jumped about 50 feet or so off a bridge (on the downstream side so he couldn’t see if anyone was coming) and landed right across my legs just above my knees.

I had to have EMT’s evacuate me up the side of a steep hill and be transported to the ER in an ambulance. We just got home after about 8 hours in the ER. 22 x-rays later they said that the tips of both fibulas have chips in them, my left femur has a crack, and both ACL’s in both knees are torn. I’ve got good drugs but it still hurts like hell. I can’t put any weight on my left leg, and only enough on my right to transfer. I’m supposed to use crutches only to transfer and get to places a wheelchair won’t go.

Other than that, I’m supposed to use a wheelchair for, probably, several weeks. I’m also supposed to call the orthopedic surgeon tomorrow and make an appointment to see him and see what he says. I had the nurse call the sheriff’s department for me and a deputy came out to see me. He took pictures and interviewed me, then called back later to tell me he located “the jumper” at the other hospital in town. He said he hurt his back, but that’s all I know. He charged him with negligent endangerment but didn’t arrest him because he was being treated. He said he’ll issue a summons to appear tomorrow.

The MORS crew wishes you a speedy recovery, Andy, and PLEASE be careful to everybody out there whether you’re on the water, in the water or jumping to the water.