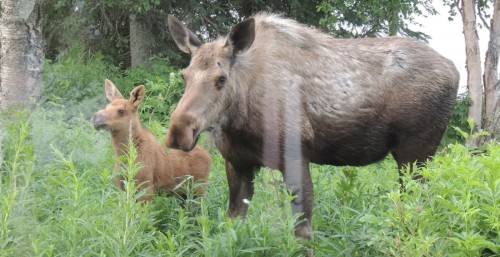 “Bad Medicine” by Trevor Johnson of Kit’s Tackle
By angelamontana

Do you remember getting the flu as a kid and your mom would shove a thermometer down your throat? Then it was, “No school today for you little bubba,” but before I could burst with joy I would hear the creaking of the medicine cabinet. I can still remember the unbearably horrible taste of the Robitussin cough syrup in the 80’s?? My golly gee whiz, it tasted like a sludge slurpee fresh from the blender made with warm sharp-tail grouse guts mixed with cherry pie. It took every last trickle of strength and one hell of a temper tantrum not to vomit all over the place. Well my friends, this is EXACTLY how I felt the first time I took my wife bow hunting. And yes, I threw the temper tantrum and darn near regurgitated my Cliff bar all over the mountainside if you’re wondering!! And so the story goes…

I had been chasing a pretty good bull and it was the third week of September and the rut was on!! I figured it would be the perfect time to take my wife bow hunting for the first time…at least to hear some bugles. So I called Katie at work and asked if she would like to take a hike and look for elk after she gets off, “Sure,” she said. So I picked up my mighty hunter and to the hills we went. Before I get any further, I have to give her some credit in that she had never been hunting before this day. So now that it’s been stated…It’s fair game. Getting back to the story, I dug around in my hunting bag and found my old leafy tree Bigfoot looking camo. Yes, I did try to get a picture and I got slapped in the face so I apologize I don’t have a photo of this ridiculous awesomeness. As we headed up the trail, we didn’t get a quarter mile and there was a giant pile of grizzly poodie poo. “What’s that???” asked Kate, biting my lip and thinking fast, “Cow poop hun.’’ Right when I thought things were looking up, I got a giant nose full of PERFUME!!!

“HUN, ARE YOU WEARING PERFUME?” I asked. “Well ya, I always do at work,” she replied. Taking at least ten deep breaths, I regained my cool and kept from smashing my bow against a tree. As we trekked on I caught movement out of the corner of my eye. There in front of us stood a huge cow moose and her baby. The good news is that this is a pretty up close and rare encounter…the bad news is, well…bad! Before I could turn around and tell Katie not to move she was running back down the trail at full bore yelling and screaming. This in turn made momma moose nervous and decided to chase her for about thirty yards. Hopping around and yelling, I finally got the momma moose to change her mind about trampling Katie. Once the moose family moved on it took a solid five minutes to convince Kate to keep on truckin’ deeper into the sticks. Wondering if I should have let my wife win in those five minutes; to the next ridge we went.

Getting into the realm of where Mr. Big had been hanging out it was time to let the Berry Thunder Bugle do its magic. As I let my immature rag horn sounding bugle scream from the end of the tube we waited in anticipation…or at least I did. After thirty seconds with no reply the most unexpected thing happened. Brace yourself for this; I would have expected a rhinoceros to come into my bugle before this. As we stood in the silence Katie said, “Why you don’t just go like this (at the top of her amazingly LARGE lungs) “EEEEEEEEEEEEEELLLLLLLLLLLKKKKKKKKKKKKK WHERE ARE YOU?” Thinking we were about to be attacked by a mountain lion I almost jumped for cover. Then, realizing what she had done (and feeling like my manhood had just been kicked by a bull) I literally had to run up the mountain to blow off steam so I wouldn’t stab myself with a broad head. She was tagging behind me saying, “What hun…I thought it would be funny.” “Not funny,” I whisper/yelled at her! I then explained that you have to be quiet and things like that are ABSOLUTELY not allowed in the woods. I could tell she felt bad so I tried to calm down and move on.

Getting to our next location (hopefully far enough away from our previous disaster zone) I decided we should try one more time. I placed Katie in a group of bushes and told her to stay still and quiet. She agreed and I moved up the hill about ten yards and got out the bugle. Right when I was about to sound the horn…YUP, you guessed it. From Kate’s location came the most awfully horrid noise I’ve ever heard. Looking back down the hill expecting to see Katie’s larynx in her lap, she was blowing her nose into a Kleenex. As I was about to strangle myself with the bugle, I came to my senses and realized this was entirely my fault. Katie had come from a family that didn’t hunt and she has had very little experience in the outdoors. I looked at her in the bush with snot on her nose saying, “I’m so sorry hun, I think allergic to the bush you stuck me in.” Laughing it off I gave her a big hug and we headed for the truck.

Before this forest nightmare could end of course we had to have one more horrific event. As we were almost to the truck we heard something coming through the bushes towards us. I jumped in front of Katie right before a rabid skunk shot out of the burnt huckleberry bushes. After the filthy little stinker snarled at us he turned around and started stomping his legs. “RUUUUUNNNN!!!!” I yelled and it wasn’t until the truck we stopped. Kate jumped in the truck and slammed the door. Not two steps behind her, she asked as calmly as could be, “Trev, can we keep it to fly fishing on the little Blackfoot?” Smiling, “You bet hun.”

Next trip to the little Blackfoot a badger forged the river not ten feet from us…ahhh!!