Cutthroat Trout are a wonderful Rocky Mountain native fish. Their bright orange color slashes under the mouth and gills, giving the trout their common name. 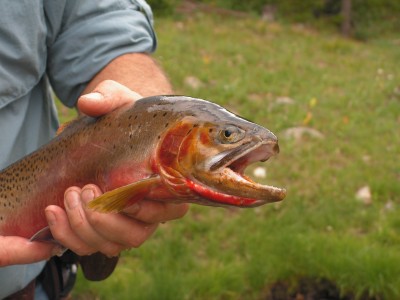 An Indian legend describes how neighboring tribes once competed for the trout as food. One tribe seemed to be encroaching on the other tribe’s “fishing waters”. The angry chief had his warriors catch all the trout and place them into a large pool. He then used a ceremonial knife to place a tag or identifying mark on every fish to show ownership. The ceremonial mark was the “cut on the throat” of each trout. This “cut mark” was also a warning to other tribes to stay away from their “Cutthroat” trout.

The “Cutthroat” is found throughout the Greater Rockies watersheds and is Montana’s only “Native” trout species. All other trout species have been introduced. “Cutthroats” can be found in many mountain lakes and some rivers such as the Yellowstone. No other trout takes a dry fly as “sexy” as a “Cutthroat”. Their slow and wide-mouthed take is unique and exciting. Most anglers set the hook too quickly and miss the strike. “Cutties” don’t jump as much as other trout species but they fight hard and are great fun for the beginning angler.

The” Cutthroat” readily breeds with other trout species and has formed the hybrids such as the Golden Trout and Redband subspecies of Rainbow trout. “Yellowstone Lahotan Cuts” are stocked in many lakes and have established strong populations that often become self- sustaining. Typical trout fishing tackle, baits, flies, and lures work well when fishing for “Cutties”. These aggressive trout are great sport and table fare. There is just something special about a meal of campfire cooked filets of pan sized cutthroats. A side of corn bread, and sautéed mushrooms make for a real gourmet campout dinner.

Some traditional habitat of the Cutthroats is now threatened by the introduction of other trout species, development and pollution. Yellowstone Lake was the home to an amazing population of Cutthroat trout. Recently, introduced Lake trout have devastated the native fishery. If not for commercial netting and a mandatory kill policy for Lake trout, the Yellowstone Cutthroats may become wiped out. Increased populations of pelicans have also impacted populations of many trout and other fish species. Without future protection and management, the once Montana Native may become just another Campfire Story.

It is important to also maintain populations of ethical and voting fishermen and women. Take a kid fishing so they can discover the joy of the “Cutthroats” and their wild places. When kids become voting adults, they can help to guarantee a future where we can continue to enjoy and appreciate the Cutthroat Trout.