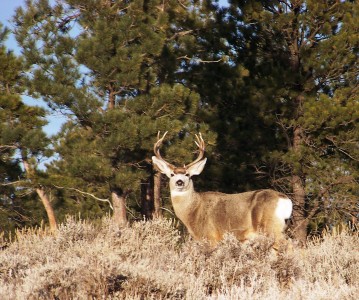 As you prepare to go deer hunting this fall, here’s something to think about: Are you seeing fewer mule deer in the field than you used to, and if so, why?

According to a western wildlife agency group that’s been tracking mule deer, the animals are in a decline or stable in many western states. Wyoming is one of several that has seen a decline, but pinning the cause on any one reason is difficult. In Montana, mule deer numbers are considered stable, but some areas are seeing reduced numbers due to drought, the harsh winter a couple of years ago and disease.

Most people agree the mule deer’s heydays were earlier in the 1900s, and maybe even continuing into the 1960s. What was the cause? Well, it could be that World War II let the populations grow because fewer men were hunting. It could be that those were wetter years, providing better habitat. And it could be partly because there was more habitat for the animals in the West because there was less construction in prime deer habitat.

If you’re interested in more information about mule deer, there are two new books out with loads of information. One was produced by the Boone and Crockett Club in Missoula and contains some great old photos of massive mule deer that were submitted for the club’s record books. The other is by Wyoming hunter Mike Eastman condensing his 50 years of knowledge on mule deer, everything from how to stalk them to gear you may need. For more information on the books, see my story in Sunday’s Billings Gazette or online at billingsgazette.com.

Here’s a link to my Thursday mule deer story: http://billingsgazette.com/lifestyles/recreation/studies-states-seek-to-halt-mule-deer-population-decline/article_e6a17e99-01dd-50ed-9edb-f39c976d9db3.html