The 2013 general hunting season for big game closed quietly in west-central Montana on Sunday evening, with deer harvests through the Anaconda, Bonner and Darby Check Stations nearly equaling those checked in 2011 and 2012, and elk harvests up slightly from last year.

Numbers of elk and deer checked through the three check stations totaled 1,116 this season, 19 more than the total of 1,097 recorded in 2012.

The elk harvest of 431 through the three check stations was up from the total of 397 last year, due to a bump in harvest checked at the hunter check station near Darby.

“Elk were more available to hunters in the East Fork (Hunting District 270) this season, and we saw more hunter-trips as well as harvest through Darby as a result,” said Montana Fish, Wildlife & Parks Region 2 wildlife manager, Mike Thompson.

The Bonner Check Station is the region’s bellwether for white-tailed deer, according to Thompson, and hunting success for whitetails in the Blackfoot was fairly good, despite the weather. The white-tailed deer harvest at Bonner of 327 was down 9% from last year. While harvest totals are important, FWP biologist Jay Kolbe is also keeping a close eye on the age structure of the animals he checks at the station as a tool for predicting future populations.

“We continued to check a relatively high proportion of younger age-class bucks at Bonner, which suggests that Blackfoot deer hunters can look forward to some good hunting over the next few years,” Kolbe said.

The elk harvest through Bonner of 56 was 39% lower than last year and 54% down from the five year average. Weather conditions in the Blackfoot were very difficult for elk hunting all season long, capped by a freezing rain event on Sunday morning, Kolbe observed. The mule deer harvest of 51 was 14% below last year and 43% lower than the five year average.

Hunter-trips and harvests through the Anaconda Check Station this season were as low as or lower than any year in the previous five. Elk harvest at Anaconda totaled 46, while white-tailed and mule deer harvests were each 15.

“In the Upper Clark Fork, hunters never got the weather needed to achieve significant harvest, or even average harvest,” reported FWP biologist, Ray Vinkey. “Deer and elk remained widely scattered up to the very end of hunting season, and deer harvest did not even pick up significantly with the rut.”

For the second season, FWP biologist Vickie Edwards operated a check station on weekends at the mouth of Fish Creek, in Mineral County. Edwards checked 1,626 hunter-trips in 2013, along with a harvest of 68 white-tailed deer, 20 mule deer and 4 elk—numbers almost identical to those that she tallied last year.

The data and conversations with hunters at check stations will inform hunting season proposals for 2014, Thompson said.

“The check station information could not come at a better time,” said Thompson. “FWP will present its recommendations for next hunting season to the Fish and Wildlife Commission on December 12, where the Commission will adopt tentative proposals for public comment. Look for a public meeting near you in January.” 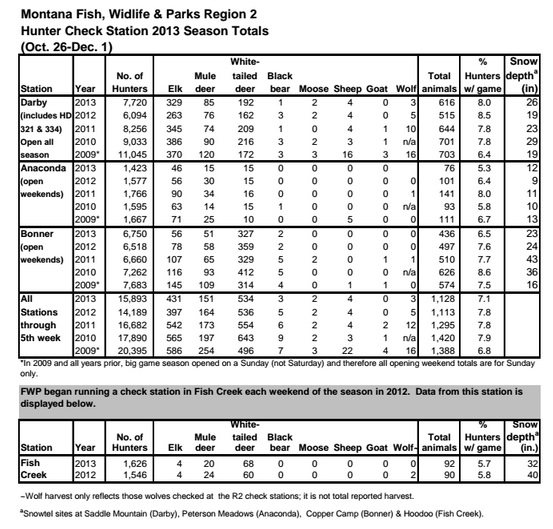