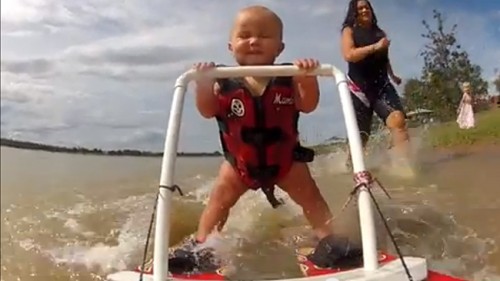 It is never to early to start thinking spring and summer. Recently a video has surfaced on the web, of a toddler turned water skiing pro.<!–more–>

Ryder Ray Anderson is just learning how to talk. But on water skis, the tyke is a pro. Mom Tamara Blair captured video of her son’s second water-ski attempt in May 2013.

Ryder first made waves at seven-and-a-half months of age when his parents made a video of him as they pulled him along the shore. That quickly went viral, with more than 771,000 views on YouTube. At 11 months old, when the video was shot, he’s ready to get behind a slow-moving boat with ski instructor Joel Wing on Australia’s Gold Coast.

Ryder’s skis are attached to what his mom calls a “learner board,” while his parents, off-camera, feed the rope tied to the contraption at the back of the boat to keep in control. “It’s the same board we used in the first video just so he’s got a sturdy bar to hang on to,” Blair said.  “It’s the proper way to learn how to ski.”