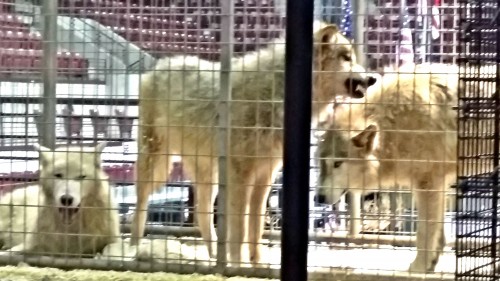 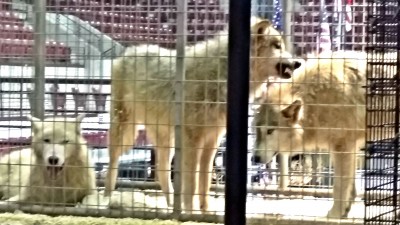 The Great Rockies Sport Show in Missoula this past weekend was a blast, as always, and hopefully you stopped by the Montana Outdoor Radio Show booth and picked up a Guaranteed Lure from the Captain while you were there!  In addition to all of the action at the different booths at the show, there were some pretty awesome demos this year, too.

One of my favorite parts of the weekend involved three wolves and guest speaker Toby Walrath, who is also President of the Montana Trappers Association and was doing a demonstration on trapping wolves in Montana’s harsh winter conditions.  It was by complete coincidence that three wolves would be among the spectators at this particular demonstration.

I found it quite interesting to see the canines react when Toby busted out the gland lure.  Let’s just say that the lure he was using probably would’ve worked on these wolves, which is a good sign it would probably work on other wolves.  That lure made these wolves restless and even more curious about what that scent was. 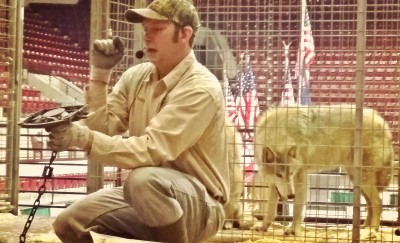 If you are wondering why there were actual wolves at the Great Rockies Sport Show, and from Washington, nonetheless, it was because there was also a demonstration by Predators of the Heart this past weekend.  Predators of the Heart is a non-profit organization that travels around educating people with live animals, to include a mountain lion, wolves, snakes, crocodiles, lizards and other exotic animals, many of which they reinforced “would make great pets”.  That is an entirely different topic, though.  So, sticking to the current subject, the irony of the wolves being in attendance at the wolf trapping demonstration was quite amusing, and the guys from Predators of the Heart were pretty cool and even complimented Toby on his seminar.

All in all, the unexpected living wolf props were an awesome addition to Toby’s demo–especially when he was referring to the size of wolves and how they stand.  It’s just a good thing that wolves don’t have cell phones, because I would imagine those wolves would’ve already texted their relatives, in the mountains of Montana, everything Toby taught the crowd about trapping, and wolves are already hard enough to find as it is. 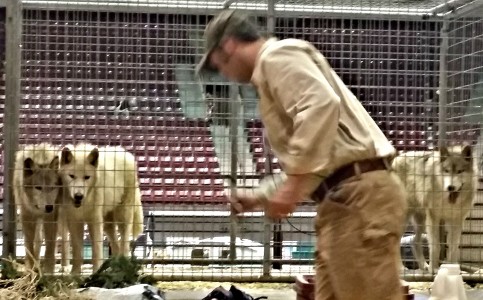