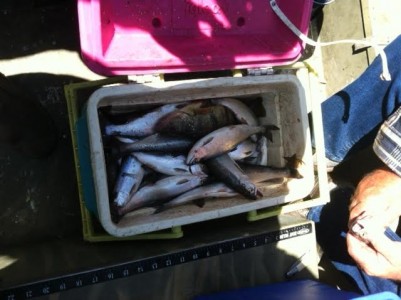 Lake Mary Ronan produced salmon again for the Captain and his crew Thursday. “It was a gorgeous day weather wise on the water and to top it off we caught our limit of kokanee and one nice 12 inch perch”, the Captain said. The crew consisted of Don Beardsley of Missoula, Todd Harrison of Lolo, and Sam Bert from Whitefish. “We got  on the water at 8:30am and headed out to a spot that I did well last weekend”, added the Captain, “in fact it was the same spot that a school of salmon have seemed to be hanging out in west on the shoreline of CampTuffit for the past week”.

They were fishing in 22 to 24 feet of water. The fishing started off steady but slow for them but they stayed in the same spot and had 40 salmon in the boat by 12 noon. “It really picked up around 10:30-12noon it was in that time period that the salmon really went on the bite”, he said  There were about 20 boats on the water fishing for salmon north of them and the Captain didn’t have a good opportunity to see if they were catching fish. However the FWP game warden that was checking fishing licenses at the State campground boat ramp said he thought the action was pretty good from the reports that he had heard.
“We went back and forth from shrimp to just maggots on our glow hooks”. The one common thread was they were using a squirt of shrimp oil on their offerings. Todd Harrison also caught the nice 12 inch perch using his swedish pimple-glow hook salmon set-up. 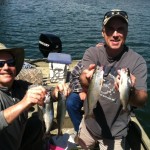 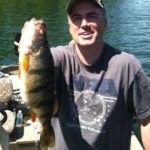 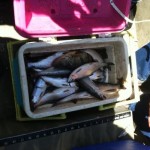 Cooler with Catches of the Day! 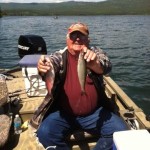 Don Beardsley with a couple of his catches