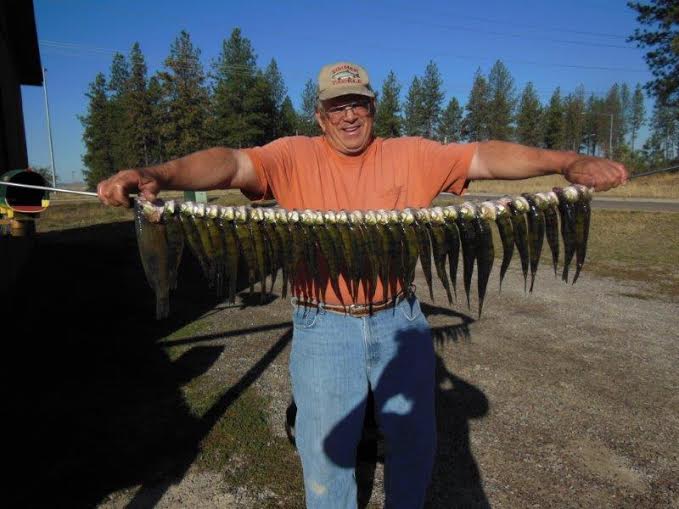 Perch are Biting at Flathead Lake!
By angelamontana

Perch are biting on Flathead Lake. Yes it is Fall Mack Days time, but the perch are biting on east Polson Bay on Flathead lake. Dick Zimmer says he found the perch in 11 feet of water and caught 40 fish while fishing late in the afternoon. “The perch were as big as 13 and 1/2 inches long and they were on the bite”, he said. Zimmer recommends to start by using a nightcrawler and then use a piece of perch meat after that, “it seems the keep the smaller perch off”.

You might try a cast and blast this weekend, as the opening of pheasant season Opens Saturday. Waterfowl season began last weekend.

Here’s the latest report from the Macman:

October 8, I was able to take time for a fishing trip that falls under the category of “research” out to East Bay (East side of Polson Bay). After trying several places further west in the bay, I worked my way into an 11 foot depth about midway North and South where I began to have bites on both rods.  It was time to throw in the anchor.  At first all the fish were small with a standard night crawler perch bait.  The fish were biting so fast I thought a heavier bait would encourage larger fish and make it more difficult for the smaller fish to ingest the hook. I began to cut 2 ½ to 3 ½ inch strips of perch and also cut up fish for chum.  Very quickly I was catching much larger fish.

The larger fish would come through in bunches.  So I was often getting them on both poles at the same as well as many times having two on one line.  Great fun except I lost an inordinate number of fish while lifting them into the boat (should have used the net).

I was using a perch fly-flash fly combination setup on one pole and two perch flies above a bottom weight on the other.  Because of heavy weed conditions most of the time I was fishing vertically right alongside the boat.

Water temperature was near 60 degrees. The perch should continue to feed until temperatures drop to the low to mid 50’s.  They probably began being active when water temperatures reached 65 degrees which means I missed from 2 weeks to a month of good fishing.

Brad Vaughn and I headed out again to see if the perch fishing the day before was a “fluke “or not.  There is only one way to describe the fishing we had.  “Incredible”.  In two hours fishing from 5 to 7 pm. I filled ¾‘s of a 48 Quart cooler with perch.  One of which was the longest I’ve caught in a long time.

There are reports of good perch fishing south and east of the Big Arm State Park boat ramp in 25 to 35 feet of water.  Maggots or night crawlers being a good bait there.

The public docks around Polson, the Armed Forces Memorial Bridge area and the points and bays on the Westside of Polson Bay are also possibilities for good perch and small mouth bass fishing.  Be aware that the limit on small mouth is only 5 per day.  Some days the fishing for them has been so good it has been hard to quit at 5.

As water temps drop and the lake trout approach their spawning season they’ll be all round easier to catch and more accessible to shoreline and dock fishermen.  If you want to catch them for personal use it’s better to fish on the day when the Mack Tournament is not going.

I want to add a tip for enhancing the flavor of any fish.  Sprinkle chicken bouillon granules either in the egg batter mixture or on the fish before frying or baking.  I find this makes a pleasant addition to the flavor.