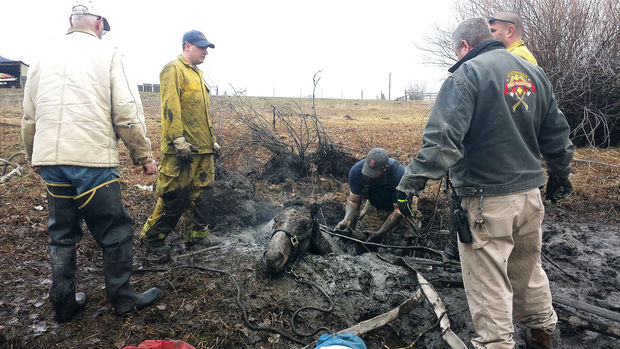 A horse that was neck-deep in mud had its life saved, thanks to the Victor Volunteer Fire Department on Wednesday, February 11, 2015.  Take a look at this articl efrom the Ravalli Republic:

VICTOR – When members of the Victor Volunteer Fire Department were called out Wednesday to a nearby ranch for a horse stuck in the mud, none of them could have imagined the challenge they’d soon face.

“When we arrived, all you could see sticking out of the ground was the horse’s head,” said Fire Capt. Mason Kay.

The horse had stepped into a natural spring and apparently began to struggle when its hooves slipped in the mud.

“We’re not really sure how the horse got itself in that situation,” Kay said. “The spring wasn’t that big to begin with. When the horse began to struggle, it apparently made it bigger.”

Getting it out of the bog wasn’t going to be easy.

The firefighters attempted to dig around the horse, but the amount of water and mud at the site made that challenging. On top of that, there was some barb wire from an old fence buried in the mud.

“Between that and all the rocks, it made digging hard on us,” Kay said. “There really wasn’t enough room to get a shovel there.”

The firefighters couldn’t just start pulling on a rope attached to a halter. They knew they needed to figure out some way to get something around the horse’s chest to help ease it out of the muck.

Kay decided to try fashioning a makeshift sling out of a firehose.

“A firehose is wide and flat and kind of soft,” he said. “We started to see-saw it down under the horse, one inch at a time, pushing and pulling.”

Eventually, they were able to get the fire hose under the horse’s chest cavity. They attached the hose to some ropes that were then hooked to a winch on the fire truck.

Once they were able to get the horse’s front legs free and on solid ground, they tied another hose a little further back and pulled the rest of the animal out.

It took the six firefighters nearly an hour to free the horse.

“It was exhausted,” Kay said. “It was quite cold from being in the water for that long. It wasn’t able to stand on its own. Three of us stood on either side to keep it upright. It kept wanting to go down.”

The horse was transported to a local veterinarian, where it will stay for a few days.

Kay heard Wednesday night that other than a couple of cuts and scrapes, it appeared like the horse was doing pretty well.

“The owner was super appreciative that we managed to get it out in such little time,” he said.

A horse rescue isn’t something that happens often for the volunteer crew.

“You never know what’s going to happen one day to the next on the fire department,” Kay said. “Rescuing an animal of that size without it being able to use its own muscles was pretty complicated, but it worked out just fine.”