A New Italian Invincible? (with Colonel Smoothbore)
By angelamontana

This year has seen the introduction of several new shotguns. Last week I discussed the new Benelli™ 828U and a few weeks back we looked at the Caesar Guerini’s® Syren® line of smoothbores designed for women. Guerini has brought another new gun to consumer market. It’s called the Invictus. 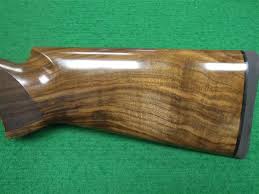 n. However, the new gun has some unique design features that should add lots of longevity to it. First, the frame is somewhat wider; this increases bearing surface between the forearm iron and the receiver reducing friction and increasing part life. There is another innovative part called the “Invictus Block” that fits in the bottom of the receiver, is replaceable, and Guerini claims it increases locking

surface area, also increasing gun life. The gun does not have hinge pins or trunnions, but instead the monobloc rotates open and closed on “Invictus Cams” that are also replaceable. These cams are available in various sizes allowing for excess headspace to be removed simply by replacing them with a larger size. Replacement of both the block and cams can be performed by the gun’s owner; they are very simple operations and will save one a trip to the gunsmith. The wider frame allows for a wider locking bolt ensuring a stronger connection between the monobloc and frame. The pushrod release in the forearm is housed in an elastomer bushing that should reduce vibration between it and t 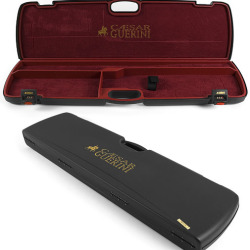 Like all Guerini guns, the Invictus is made in Brescia, Italy. It has an all steel polished receiver with a protective coating called Invisalloy™ and sports a very nice engraving pattern unique to the Invictus. The stock is walnut with a hand rubbed oil finish and 26 lines per inch checkering. The gun has Guerini’s DPS trigger system and is available in either of two different pull weights. A black recoil pad, 6 MAXIS competition chokes, and a fitted hard case make for a nice package. 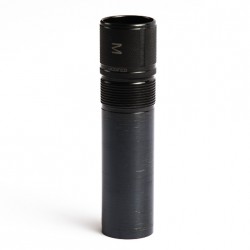 While Guerini’s website shows only the Ascent and Sporting models, I received a 2015 Retail price list from the company. I was really excited to see 3 trap gun options. They include a 32 inch O/U, a 34 inch unsingle, and a 32/34 inch unsingle combo. I checked with Guerini customer service and was told the trap guns should be available in June. The combo set has a MSRP of $ 11,295 and the other guns are $ 8695 MSRP each.

I have fired several Guerini models and found them to be really sweet shooting smoothbores. They have great triggers; the barrels are back bored to .735 inches in 12 gauge, and the forcing cones are 5 inches long making perceived recoil very soft indeed. Wood to metal fit, and the finish on all parts is excellent. Guerini offers a limited lifetime warranty on their guns and a program called the “Pitstop Maintenance” whereby the original owner can return the gun 3 times for service and that service is free of charge.

I am really looking forward to having the opportunity to shoot the new Invictus, especially the trap combo. I’m in the market for a new trap gun and this one just might make my bucket list.