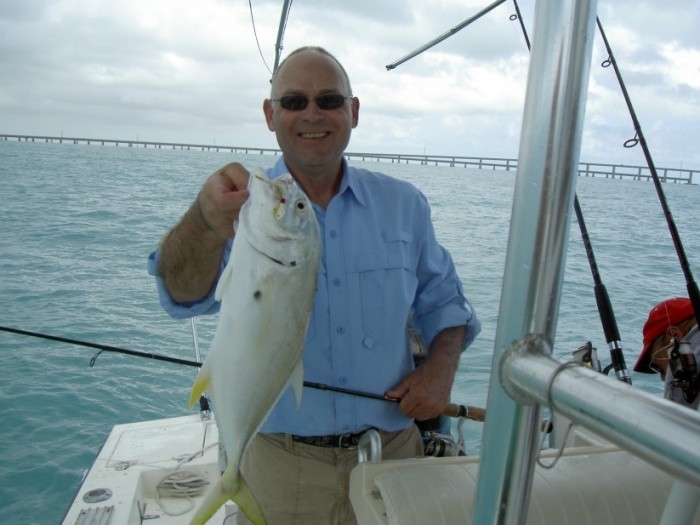 Mile Marker 50 – Kit’s Tackle Gets a Mouth Full of Salt Water! (by Trevor Johnson)
By angelamontana

March 5th Team Tubbs (Tom & Roxanne) hopped a flight to the Florida Keys armed with their Bass Pro Extreme/St Croix Eyecon rods, Kit’s Tackle (including the new Walleye Fry), and of course, our secret weapon – CIGARS!   We rendezvoused with fellow classmates for 10 days of sand, fishing, and fun. Our hosts – Doc & Kate Neises aka the “Nicest’s”, together with two other couples, transported us from the Key West Airport to the condo in Marathon. Entertained by a new CD with songs written and sung by our buddy Tom Bennett– lyrics specific to each couple – we shared tails of our trips to Marathon. What a hoot and a great way to start a vaca!

Captain Doc had been watching the weather and March in the Keys is wind, wind and more wind with no guaranteed fishing days. However, the Key Gods were with us and the first morning the radio was abuzz with boat captains spreading the word – the wind is “laying down!” Before the Tubbs could get our jet lag shaken and sea level legs working, we were loaded on the boat and headed out. A stop at Burdine’s for fresh shrimp and ice cream and then it’s all speed ahead to the “hole”. Tom was rigged up with the Kit’s Tackle Blue Fin and Roxanne with the new Walleye Fry. The rest of the group is rigged with Florida jigs and rigs.

The anchor is set, and, as the guys soon learned, Roxanne is the first to cast into the beautiful salt water blue. Within 30 seconds, her rod is bent and she’s calling out – “fish on!” It’s not big, but a nice Porgie, and pulled like he was fighting for his life. The rest of the day was filled with an aquarium variety of fish – all amazing fighters and Kit’s tackle pulling them in 2 to 1 with the other anglers in the boat. 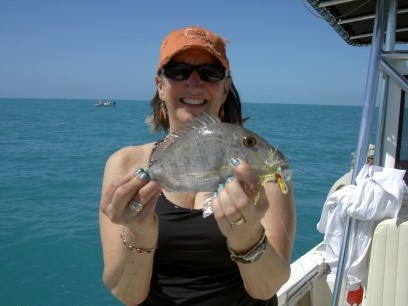 First catch of the day –Porgie on a Walleye Fry 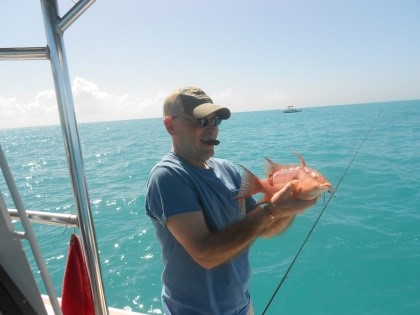 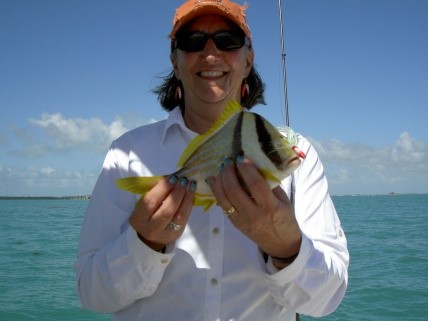 Roxanne’s brought in a Pork Fish. 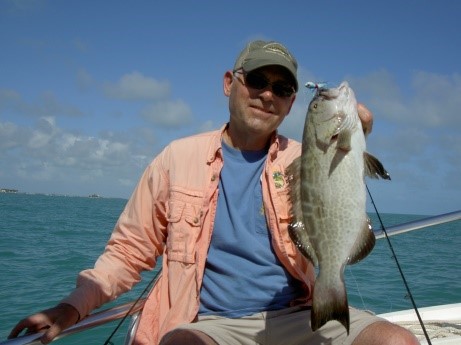 The excitement for the day was the one that got away. Dead stick with cut bait – rod tip down and line a screamin’!!! Tom grabbed the rod and held for dear life. Captain Doc chased the run with the boat for 2 miles for over an hour to help out, but to no avail – SNAP and it’s off. Speculation – either a shark or large grouper. That’s our story and we are stickin to it. 🙂

Team Tubbs and the rest of the crew brought in enough Porgies, Mangrove Sappers and Grunts (yes, they really grunt like little pigs) –for dinner for all of us. Burdine’s does a wonderful job of preparing your fish to order – with sides of coleslaw & hush puppies – while you are relaxing from your day and enjoying a cold one (or two).

Second day Captain Doc and Captain Brian split the whole group of 8 up into two boats   Keeping with tradition, we stop at Burdine’s for live shrimp and, of course, ice cream. Off we go to the 7 Mile Bridge. Captain Doc rigged up with the Kit’s Tackle Walleye Fry (enough of this getting his tail kicked by those MT knot heads!). Tom hooked something good sized and fighting, lost it and hooked it again. At that same moment Roxanne hooked something good sized and pulling her line, rod bent to the max, under the boat – it’s a double hook up of Jack Carvelle’s. Captain Doc said – what the heck and threw his non-baited Walleye Fry jig into the water and BAM! We have not 1, not 2, 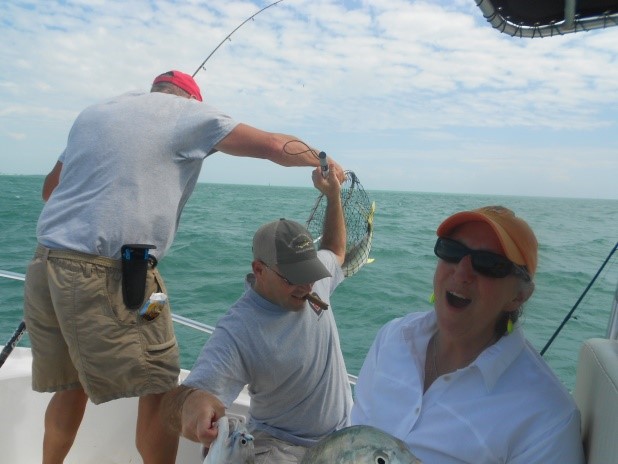 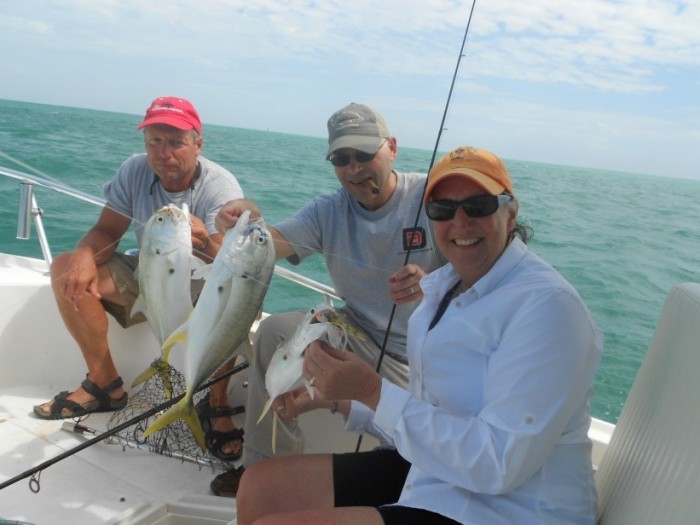 Team Tubbs could go on and on about the 6 days of incredible fishing at Mile 50 and the 7 Mile Bridge. We found a honey hole now marked on Captain Doc’s GPS as 007 (that’s Bond, James Bond!) and the last day out – Holy Spanish Mackerel! Tom Bennett couldn’t keep them off that Walleye Fry. Those Macs ate the pretty tail and finally took the whole jig! Our fishing trip tally included: Black Grouper, Grunts, Hog Fish, Lady Fish, Mangrove Snappers, Cabrera Snapper, Jack Cravelle, Yellow Jack, Porgies, Pork Fish Trigger Fish, Yellow Tail, Blue Runners and, for bait, Pin Fish. – . No huge fish, but Man oh man! Those fish in the Keys are BEAUTIFUL!!!!!   Oh, and let’s not forget the weather – low 75, high 85. One New Yorker asked why we from MT would want to fish in the Keys – DUH!

So many great memories – fishing, good food, and good company – life is good! One of Roxanne’s special memories was the looks Tom got from the guys in airports going and coming from Orlando and Disney World with their families on spring break. They’d look at Tom, his rod case, his bright yellow dry bag, look at the family, then back at Tom, his rod case, and dry bag with their chins on the floor and the “you lucky duck!” look on their faces. Priceless!

It’s great to be back home in Montana, but life in Keys doesn’t get much better than this!