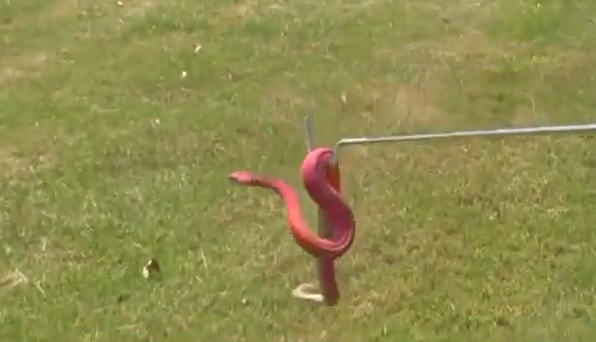 What Caused a Rattlesnake in Utah to Turn Pink? [VIDEO]
By angelamontana

If you ever see a pink rattlesnake in the wild, chances are it isn’t naturally pink.  Check out this story that is the perfect example of what NOT to do if you are confronted with a rattlesnake:

SALT LAKE CITY — A pink rattlesnake was found in the foothills near the University of Utah Hospital.

Director of Reptile Rescue Jim Dix said he believes it was likely a construction worker who used ground-marking equipment to paint the 3-4 foot venomous snake.

It’s also against the law to harm a wild snake in Utah…Class B misdemeanor, to be exact.

If you have a rattlesnake in a place where you feel endangered, Dix said the best thing to do is to keep an eye on it and call your local Reptile Rescue or animal control.