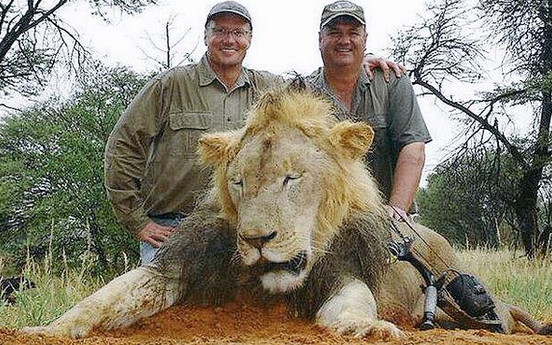 Cecil the Lion  was an inhabitant of Hwange National Park and a major attraction in Zimbabwe.  The 13 year old black mane lion was killed and has now started an outrage across Zimbabwe and the United States.  Walter Palmer, a Minnesota Dentist, is known as a trophy hunter and paid an estimated $50,000 to hunt the lion.  He hired two Zimbabwe guides to assist him on the hunt.  They lured Cecil out of the park with an animal carcass and other scents outside the park area.  They then shot Cecil with an arrow which wasn’t enough to take down the lion.  Cecil survived another 40 hours while they tracked him down to finally kill him with a rifle.  Cecil was skinned, beheaded and the hunters allegedly tried to destroy the GPS collar that Cecil was wearing as part of an Oxford University research project.  The two Zimbabwe guides are expected to appear in court today facing poaching charges.

Walter Palmer says “I deeply regret that my pursuit of an activity I love and practice responsibly and legally resulted in the taking of this lion.”  Though Palmer claims to practice Trophy Hunting responsibly and legally, he has been charged with making false statements to US FWP about illegally killing a black bear several years ago in Wisconsin.  He was also featured in a New York Times article about this very issue.