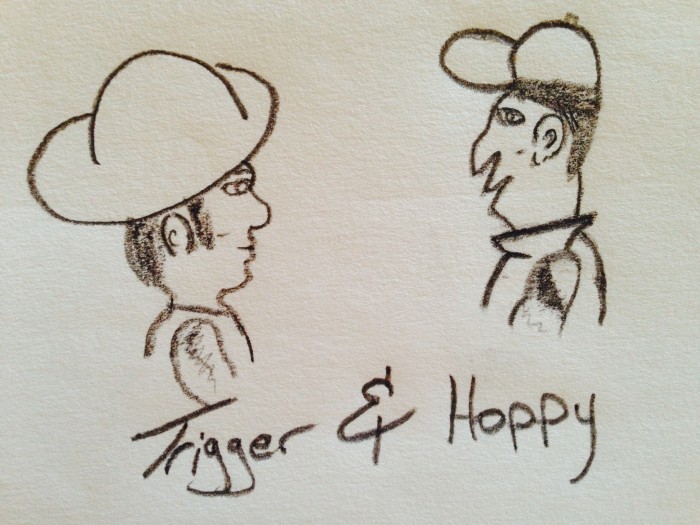 “What is that thing you’ve got there Hoppy”? Trigger asked with a confused look.

“It’s a new Skill-Less Auto-Matic, a.k.a. SLAM.” Hoppy said holding it up with pride.

“Hmmph, looks expensive. “ Where’d you get the money to buy that thing?”

“I traded my washing machine, a propeller for a 50 horse Johnson and three fishing rods for it.”

“How will you wash your clothes now?” Trigger asked raising his hands in disgust.

Hoppy wrinkled his nose. He obviously hadn’t considered that conundrum. Soon realizing that no one really needs clean clothes during the summer anyway Hoppy dismissed Triggers accusatory tone and continued clamping the devise onto the gunwales of Triggers boat.

Trigger lifted his rod and tackle box from the dock and slid them across the stern, out of the way of Hoppy’s inevitable mess that usually ended with something being lost, broken or somehow smashed to H-E double hockey sticks. “Hey Hoppy?” Trigger said with one eyebrow raised.

“Where are your fishing rods?”

“I told you man, I traded them for the SLAM.” Hoppy said with a chiding tone without looking up from his task of twisting the final screw into place.

Trigger figured that skill-less gadget must have more features than it appeared but he wondered where the rod and reel was contained inside that machine. He’d likely find out soon as he pulled the lever into reverse and slowly navigated out of the boat slip and onto the lake.

Clouds hung low over the water and the wake from the boat rolled away ending with a slap against the rocks settled along the shoreline. The temperature was just right for a flannel shirt and a hot mug of coffee held in Triggers left hand as he found the rocky point that stretched out at least one hundred feet before dropping off to the deepest part of the lake.

“Hey man, can I use your rod?” Hoppy asked with a hurried voice. “There’s like 23 fish under the boat right now!” His excitement growing and his eyes glued to the screen.

“What am I supposed to fish with?” Trigger growled back instantly.

“No man, seriously I need your rod. I’ll be able to watch the fish chasing the lure on the screen; it’s going to be awesome!”

Trigger was just curious enough about SLAM to offer up his rod but not without clarifying a time frame first. “I’ll give you five minutes to catch a fish then I want my rod back.”

“Yeah, Yeah – just hand it to me.” Hoppy demanded, grimacing when he noticed the reel was on the wrong side. “Why do you have your reel upside down?”

“Shut up and fish hippy, I mean Hoppy. You’ve got four minutes.” Trigger smirked as he looked at the screen trying to decipher all the lines and squiggles.

Hoppy tied a small jig on the end of the line and dropped it into the water, stripping line rapidly. A small green light appeared on the screen sinking through blobs of red and blue.   Suddenly one of the red blobs moved and Hoppy jerked the rod hard enough to pull the lips off a tarpon and reeled at lightning speed.

“Did you get ‘em?” Trigger quizzed.

“Nah, but did you see that fish chase it?!” Hoppy yelled.

“Chase what? What fish? All I saw was a green blob and a bunch of red blobs floating around on that blue screen. “Trigger said, unconvinced.

Hoppy flipped the bail on the reel and began lowering the lure into the deep water. Look at all those fish man and there’s the lure.”

“What fish? This is ridiculous, give me my rod back!” Trigger yelled angrily.

“No way man, I’ve still got three minutes left to catch a fish.” Hoppy said as he held the rod over the boat with arms like an arangatang.

“That fish o’matic has got your brain fried Hippy!” Trigger said as he leaned over Hoppy trying to wrestle the rod from his arm. He pushed down hard trying to get the rod close enough to grab but Hoppy’s arms hung out over the water. Suddenly the rod doubled over with a jerk and the reels drag screamed for a second just before the rod plunged into the water.

“Wow! Did you see that?!” Hoppy exclaimed.

“See what? My favorite fishing rod falling into the lake?” Trigger asked.

“No! That fish was huge! It took up like, three inches on the screen and it was orange! That means it’s huge!” Hoppy yelled with excitement. A big smile stretched across his face. “Hey look, you can still see the rod and reel right there, that fish is still hooked!” “I told you this was going to be awesome!” Hoppy said as he leaned in pointing at the screen.

“You needed that stupid screen to tell you that when a fish pulls my rod out of your hand that it’s big?” Trigger asked with a grimace.

“No but the orange line is proof that it’s at least 40 inches long. It only shows orange when its 40 inches man.” Hoppy said still staring at the screen with a big smile on his face.

Trigger bent forward, staring at the blobs and lines arranged in a rainbow of colors on the screen and then stared blankly into the dark water. “I liked it better when fish filets and photos of people holding fish were the only proof! At least we can still have cold beer and sandwiches while we’re fishing …Hey ah Hoppy, where’s the cooler?” Trigger asked.

“Huh? Oh, I traded my cooler, bow and three rifles for a Buck Alert Machine, a.k.a BAM! It sends alerts with photos directly to your cell phone when a big buck walks by. You can program it so it will only send alerts for 4 points or bigger and calculates deer movements so you can determine the best time to hunt. It will be here in three weeks and man it’s going to be awesome!” Hoppy exclaimed.

“So let me get this straight; you traded your fishing and hunting stuff for machines that prove when there are fish and game nearby called a SLAM and BAM?” Trigger asked.

Trigger rolled up his sleeves and said, “I’d like to demonstrate the SLAM-BAM that I’m familiar with and it doesn’t involve batteries!” 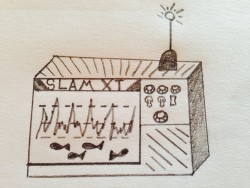 This story written by “Toby Trigger” was originally published in Montana Woods and Water Magazine August 2015 Issue.  For more information about this great local publication check out the website at:  https://montanawoodsnwater.com