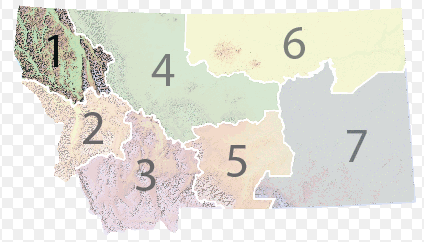 Deer Harvest Still Slightly Ahead of Last Year in Northwest

season, according to check station results around Region One.

At the six northwest Montana check stations through Sunday, November 22, a total of 15,

percent rate of hunters with game. Harvest was up slightly as compared to last year when

7.4 percent of hunters checked game. Hunter numbers are up about seven percent as

The Highway 2 Check Station west of Kalispell has led the way in whitetail counts,

Hunters are reminded that it is buck-only for whitetails in northwest Montana. Antlerless

year olds). Mule deer are buck-only for the entire season. Elk are brow-tine bull only.

Spike bull elk are not legal game for any hunter in Region One. Hunters should refer to the

hunting regulations for the hunting district they plan to hunt.

Biologists report that the whitetail rut is now in full swing, which should aid hunters as they

take to the field during the upcoming Thanksgiving holiday. This past weekend, hunters

brought a good number of older bucks through the check stations.

The general big game season ends one half hour after sunset on Sunday November 29.

Wolf Harvest: The wolf take is about the same as last year at this same point in the 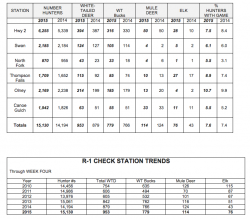