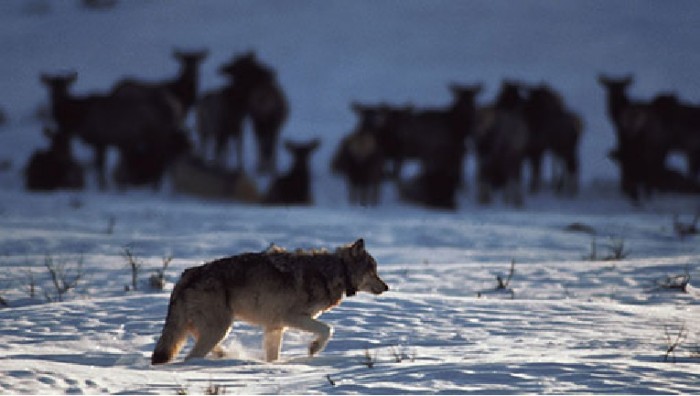 Elk numbers and in particular bull numbers have suffered from drought and predation severely enough that the Montana FWP is proposing further restrictions for hunters to try to help keep elk from continuing to plummet.  The following is an excerpt from the proposal by FWP Biologist Karen Loveless for unit 313 for the 2015-2016 hunting season:

2. What is the objective of this proposed change? This could be a specific harvest amount or resulting population level or number of game damage complaints, etc.

The objective of this proposed change is to increase the brow-tined bull: cow ratios to within 20% of the long-term average, and to adjust the current youth opportunity to be consistent with the limited draw permit structure. Additional B licenses are being created in order to provide additional opportunity, with a conservative quota in order to minimize biological impact to overall population numbers.

This elk population spans the boundary of Montana and Yellowstone National Park (YNP). The decline in brow-tined bull ratios observed within HD313 has also been observed across the total population, with 9 brow-tined bulls per 100 cows observed on average since 2009, as compared to 31.8 brow-tined bulls per 100 cows observed on average during 1995-2005 (Table 1, Figure 1). The decline in mature bulls in the population is also evident from harvest data: the proportion of 6-point or better bulls in the harvest has declined from 88% to 46% since 2004 (Table 2).

We have made attempts to address the low brow-tined bull ratios in 313 since 2012 with unlimited bull permits. These have been ineffective at reducing harvest. The unlimited permits were introduced in 2012, and bull harvest in 2012 and 2013 was equal to the average bull harvest during the previous 5 years. In 2014 the unlimited permits were changed to first-choice only, and harvest increased with the highest number of bulls harvested since 2006 (Table 1).

What do YOU think about this proposal?

For the full proposal visit: http://fwp.mt.gov/hunting/publicComments/2015/2016-17huntingSeasonChangesProposed.html