Stressed? Use Enough Gun (with Colonel Smoothbore)
By angelamontana

Here we are in the middle of the Holiday Season and all the hustle and bustle that comes this time of year can really stress one’s life. If you’re fe

eling impatient or frustrated, I suggest you take a little break. One of the ways I relax is with one of my favorite authors. Here are a few I really enjoy and some of their writings that a

If you are an ardent “gun guy or gal” check out the works of Jim Carmichael. Carmichael was the “gun guru” at Outdoor Life for years. His book, “Jim Carmichael’s Book of the Rifle” is one of the most detailed and informative tomes one can find on long guns.

Interested in hunting? Then Jack O’Connor just might be the perfect writer for you. O’Connor’s “The Art of Hunting Big Game in North America” is one of my favorites. O’Connor takes the reader for a ride through every one of the continents big game species. His prose is not only informative,

but also excites by putting the reader right in the middle of the action.

If you are interested in Africa, the Dark Continent, Iook at the works of Walter Dalrymple Maitland Bell, more commonly known as “Karamojo Bell.” Bell was an African professional hunter at the beginning of the 20th Century and his tales will bring to mind an era long since past. Other writers of African safari fame include Peter Capstick and Ernest Hemingway, although personally, I’m not that big fan of Hemingway.

My favorite author of hunting stories is Robert Chester Ruark, Jr. When I was a young l

ad, I had a subscription to the Outdoor Life Book Club. One of the monthly selections was Ruark’s “Use Enough Gun.” It is a compilation of some of Ruark’s other works and it is one of my favorite books of all. Ruark had an uncanny ability to transport his readers into the hunting camps, the dongas, and the bush of post WWWII Africa. Reading his works will bring you to the halcyon days of the great African safaris; here’s a taste of Ruark’s finest; I hope you enjoy it. 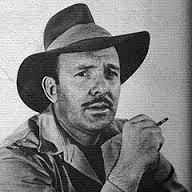 “The hunter’s horn sounds early for some, I thought, later for others. For some unfortunates, prisoned by city sidewalks and sentenced to a cement jungle more horrifying than anything to be found in Tanganyika, the horn of the hunter never winds at all. But deep in the guts of most men is buried the involuntary response to the hunter’s horn, a prickle of nape hairs, an acceleration of the pulse, an atavistic memory of their fathers, who killed first with stone, and then with club, and then with spear, and then with bow, and then with gun, and finally with formulae. How meek the man is of no importance; somewhere in the pigeon chest of the clerk is still the vestigial remnant of the hunter’s heart; somewhere in his nostrils the half-forgotten smell of blood. There is no man with such impoverishment of imagination that at some time he has not wondered how he would handle himself if a lion broke loose from a zoo and he were forced to face him without the protection of bars or handy, climbable trees.” Excerpt from Robert Ruark’s “Horn of the Hunter.”