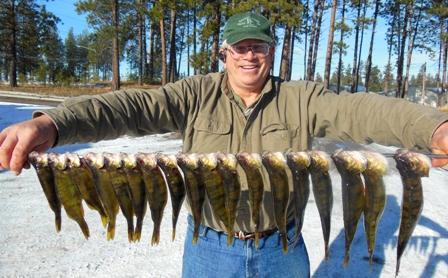 A week of continuous temperatures below freezing, no snow, and no wind made ideal conditions for ice to come on hard and fast.  After spending the Thanksgiving holiday hunting with my son, Andrew in the Billings area, my first priority was to check out local ice to determine what I could safely get on.

The place that I generally try first is the east side of Polson Bay (East Bay) because if I do fall through it is shallow enough that getting cold and wet is the danger; not drowning.  Monday afternoon I headed out for what is always a questionable endeavor.  Will I or won’t I be able to find ice thick enough to support me.  Because I’m a big fellow, if I can get out most everyone else can as well.  Often I use a spud to check the ice in front of me.  One jab and it goes through the ice is too thin.  Two jabs and I’m alright.

Pleasantly I found the ice there thick enough that I didn’t have to go through the checking process.  With no snow on it the ice is a window.  Right away I began to see fingerling perch in the shallow water, which is a good sign.  Then I began to see heavy weed beds.  The first open spot I saw was what I was looking for as a promising place to punch a hole.  With clear ice the fish are often spooky so after cutting the hole and dropping my bait and line through it I knew I’d have to be patient and still for fish to return to my location.  Maybe after 5 minutes the first appeared and the 2015 ice fishing season had officially begun.

After catching my first perch on a FLAT RAT baited with maggotsI began using perch eyes.  As I moved east toward the Paradise Cove RV Park every hole I cut produced a fish, but the first one, closest to the public access, had produced the best, so after four or five holes and moving 200 yards east I decided to return to my original hole and work west.

Because finding fish is never predictable every decision is shadowed with the unknown but driven by hope and anticipation.  Two holes later with darkness quickly approaching I was hooking and landing fish as fast as I could rebait and get my line in the water.  No real jumbos, but lots of 8 to 10 inchers which I consider fillet size.

The one anomaly was a large area of open water surrounded by ice.  At one point I was within 30 feet of the water and the ice was still a solid 4 inches.  If you decide to head out there don’t be too bold as you walk north but be careful to look for what will undoubtedly be thin ice for the next few days.  Be careful.

Email us at: macman@ronaon.net   Check out our product line at www.zimmertackle.com