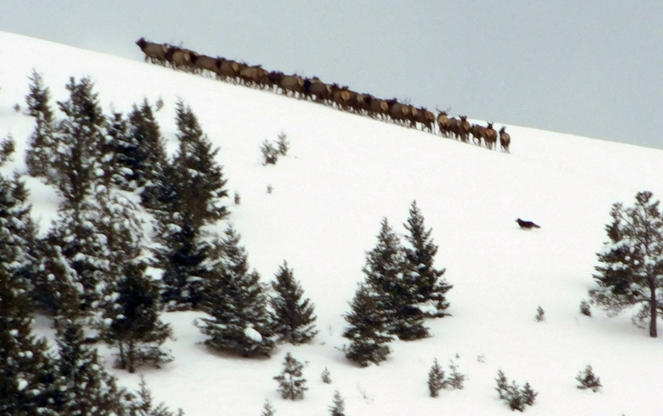 The photos in this article were taken by Brian Nostrant and information is from missoulian.com.  Brian posted the photos on his facebook page, that show a large herd of elk in a tight grouping with their eyes tight on the two large canines running around them.  Brian could only capture one canine in the frame, but claims there were two when he spotted them.  The photos were taken from the Rattlesnake area of Mount Jumbo on Thursday afternoon.  Nostrant noticed the heard grazing while spread apart until suddenly they bunched up and charged up the hill.  He then ran to grab a camera and noticed the herd was near the top of the hill and there were two canines chasing them.

The canines are not for sure wolves, but they look larger than a typical dog and were acting very wolflike as they glided effortlessly through the snow with their bushy tails trailing behind them.  Montana FWP has looked at the photos and cannot make out the type of canine either.  They are going to conduct further investigation on Mount Jumbo this week. 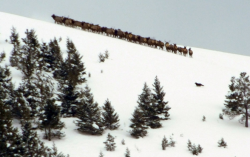